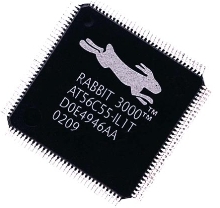 Rabbit 3000(TM) low-EMI 8-bit processor is designed for embedded control, communications, and Ethernet connectivity. It operates at up to 54 MHz and is C-friendly with compact code and direct software support for 1 MB of code/data space. Processor operates at 3.3 V and includes 6 serial ports with IrDA, 56+ digital I/O, quadrature decoder, PWM outputs, and pulse capture and measurement capabilities.

The Rabbit 3000 shares its instruction set and conceptual design with the proven Rabbit 2000(tm). The Rabbit 3000's low-EMI features, which include a clock spectrum spreader, represent a breakthrough for embedded processors.

During testing, EMI for Rabbit 3000-based boards has typically been less than 10dB micro V/m at 3 meters--and some tests have even yielded results of 0 dB. The spectrum spreader is especially powerful, effectively reducing clock-related EMI and derivative signals by approximately 15 dB--a design-critical amount, as devices often fail EMI tests by as little as 5 or 10 dB.

The Rabbit 3000 is fast--running at up to 54 MHz--and C-friendly, with compact code and direct software support for 1 MB of code/data space. Rabbit 3000 development tools include extensive support for Internet and network connectivity, with full source code for TCP/IP provided royalty free.

Programming the Rabbit 3000 microprocessor is a breeze with the
industry-proven Dynamic C® software development system (Dynamic C SE included free in Development Kits). Our successful integration of hardware and software substantially reduces development time and cost. In addition, Rabbit developers do not need costly in-circuit emulators- programming is accomplished simply by connecting an interface cable from a PC to a Rabbit-based target system. Software development and debugging can be performed over Ethernet or the Internet using appropriate accessory hardware.

Rabbit 3000 processors are priced from $8-9 in quantity. The Rabbit 3000 Development Kit is priced at only $299 and includes RabbitCore core module (with Rabbit 3000, Flash, and SRAM), prototyping board, and complete Dynamic C SE software development system (not a trial version) and documentation on CD-ROM.