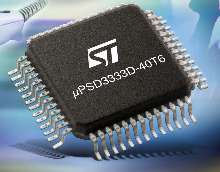 "We have been very successful in the year since the introduction of the µPSD family with designs in over 50 different application segments," stated Ruben Sonnino, ST's Vice-President and General Manager for µPSD microcontrollers. "The µPSD3300, in a class of its own, provides the embedded user with a highly integrated configurable system that all but eliminates the need for additional external peripherals."

A few of the enhancements for the new Turbo µPSD3300 series include a 16-bit Programmable Counter Array (PCA), 10-bit resolution ADC channels, SPI and IrDA interfaces. Microcontroller performance is kept near its 10MIP peak thanks to an instruction pre-fetch queue and a branching cache. In addition, the µPSD3300 JTAG in-system programming interface was enhanced to support JTAG emulation, thus eliminating the need for a hardware In-Circuit Emulator (ICE).

"The increased memory requirements for GUI interfaces and high level programming languages have generated tremendous interest in the µPSD products," Sonnino continued. "And no one is better suited than ST to provide this 'total solution' with Flash, SRAM and CPLD in a single part. ST is committed to continue providing these highly integrated SoCs by introducing additional products with even higher performance and higher levels of integration."

Based on ST's proprietary Programmable System Device (PSD) architecture, µPSD3300 devices feature dual independent banks of Flash memory, up to 32 Kbytes SRAM, and over 3000 gates of programmable logic with 16 macrocells. The dual bank Flash architecture and programmable decode logic support true READ-while-WRITE concurrent access, otherwise known as In-Application Programming (IAP). Memory mapping is handled by an integrated decoding PLD that can assign anyFlash or SRAM memory segment to any address on any memory page, or bank. Additionally, Flash memory can be allocated to 8032-code space or data space in almost any proportion as needed, which is a feature unique to µPSD devices.

Other peripherals include six PWM channels, an I2C master/slave bus controller, two standard UARTs, supervisory functions such as a watchdog timer and low-voltage detect, and up to 46 general-purpose I/O pins.

Further information on these devices is available at st.com/micropsd. The datasheet may be found online at the following address: us.st.com/books/pdf/docs/9685.pdf

About STMicroelectronics
STMicroelectronics is a global leader in developing and delivering semiconductor solutions across the spectrum of microelectronics applications. An unrivalled combination of silicon and system expertise, manufacturing strength, Intellectual Property (IP) portfolio and strategic partners positions the Company at the forefront of System-on-Chip (SoC) technology and its products play a key role in enabling today's convergence markets. The Company's shares are traded on the New York Stock Exchange, on Euronext Paris and on the Milan Stock Exchange. In 2002, the Company's net revenues were $6.32 billion and net earnings were $429.4 million. Further information on ST can be found at www.st.com.
Share