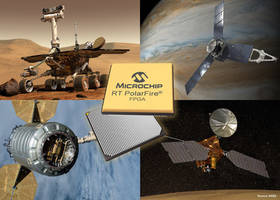 A growing number of space applications need greater computational performance so they can transmit processed information rather than raw data and make optimal use of limited downlink bandwidth. The RT PolarFire FPGA enables this at significantly lower cost and with faster design cycles than possible with application-specific integrated circuits (ASICs). It also significantly reduces power as compared to the alternative of using FPGAs based on static random access memory (SRAM) while eliminating their vulnerability to radiation-induced configuration upsets. The RT PolarFire FPGA is supported by all necessary radiation data, specifications, package details and tools customers need to start new designs now, initially with the commercial version of the device.

The RT PolarFire FPGA builds on the success of Microchip's RTG4 FPGA, which has been widely deployed in space applications that require its radiation-hardening by design against single event upsets (SEUs) and inherent immunity to single event latch-ups (SELs) and configuration upsets. For space applications that require up to five times the computing throughput, the RT PolarFire FPGA provides 50 percent more performance and triple the logic elements and serializer-deserializer (SERDES) bandwidth. It also provides six times the amount of embedded SRAM to enable more system complexity than previously possible using FPGAs and withstands total ionizing dose (TID) exposure beyond the 100 kilorads (kRads) that is typical of most earth-orbiting satellites and many deep-space missions.

The RT PolarFire FPGA cuts power consumption to approximately half that of alternative SRAM-based FPGAs with equivalent density and performance. Its SONOS non-volatile (NV) technology enables its configuration switches to be implemented in a more power-efficient architecture that cuts development and bill of materials costs through simplified, less expensive and lighter power system design while minimizing heat dissipation to reduce thermal management problems. Designs are further simplified as compared to using SRAM-based FPGAs because the RT PolarFire FPGA eliminates the cost, complexity and recovery downtime of mitigating configuration SEUs.

The RT PolarFire FPGA will undergo the standard process for meeting QML standards including class V qualification for highly critical applications. Microchip has lengthy experience achieving QML qualification for its RTG4 FPGAs and other products, which requires extensive and continuous testing including screening each wafer and package assembly lot.