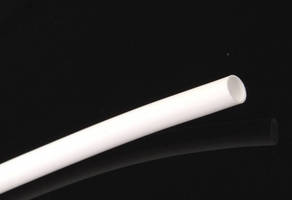 Acting like fabric, pores in TexPore(TM) expanded PTFE tubing permit cells to attach to tube as well as escape from tube, depending on application. Permeable tube can be used in dispensing of special drugs or dyes that need to be released into body quickly or in applications where gasses and liquids must be separated. Capable of operating at temperatures up to 500ÂºF, biocompatible, non-aging, non-toxic and autoclavable tubing is available in sizes ranging from 0.62-400 in. ID.

Parker Hannifin Corporation, the global leader in motion and control technologies, through its TexMed Business Unit announces the release of expanded PTFE tubing for medical applications. Parker-TexMed produces expanded PTFE, or ePTFE, by a controlled expansion of our tubing. The result is a chemically inert, micro porous tube offering properties and benefits not offered by the traditional TexFluor® PTFE tubes. Specifically, the tubing is expanded creating tiny, micro-pores to make the ePTFE tube more like a fabric rather than a traditional tube. Acting like a fabric, the pores in the TexPore(TM) PTFE permit cells to attach to the tube as well as escape from the tube, depending on the application. When needed, the pores on the tube can be manufactured close enough together to support the transfer of fluids without leakage. On wounds, the TexPore(TM) PTFE tube allows a migration of cells to grow and attach to the micro-pores of the tube wall, creating a temporary layer of cells to aide in the wound healing process. In some applications, because the TexPore(TM) PTFE tube is permeable, it is used in the dispensing of special drugs or dyes that need to be released into the body quickly or in applications where gasses and liquids must be separated. Other applications include tissue sampling, insulators, water purification and filtration. TexPore(TM) PTFE is biocompatible, non-aging, non-toxic and autoclavable. Controlled pore sizes, close tolerance diameters and state-of-the-art measurement controls ensure that TexPore(TM) expanded PTFE tubes deliver continued optimum performance. Sizes range from 0.62" I.D. up to .400" I.D. and products are capable of operating at temperatures up to 500ºF. Tubing is priced according to size, configuration and quantity. Samples, price quotations and literature are available upon request. Company Name: Parker TexMed
Address 1: 4700 Lone Star Blvd
City: Fort Worth
State: TX
Zip: 76106
Country: USA
Phone: (800) 423-6551
URL: www.texmed.us Contact Name: Janine Kruit
Title: Marketing
E-mail: texmed@parker.com