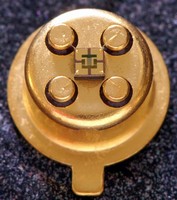 According to Dr. Mo Kebaili, Chief Technology Officer of Kebaili Corporation, many creative and talented scientists don't have access to cleanroom facilities to design, fabricate and test their own MEMS-based microhotplates for the development of new and innovative chemical sensors. Now with KMHP-100 microhotplates readily commercially available off-the-shelf, will allow these scientists to focus their effort and talent on the sensing materials development, which generally don't require MEMS expertise, and access to cleanroom facility. For example, by using sol-gels process and micro-dispensing technique, such as a micropipette to deposit a micro-drop of the sensing material onto the KMHP-100 microhotplate, new chemical sensors can be developed in a very short time period and without cleanroom access. The thin-film platinum microheater can also be used in-situ, to post-process the micro-deposited sensing material such as dehydrating, curing polymers or annealing sol-gels at temperatures up to 650°C.

The KMHP-100 Series is in production and is available now, it can be purchased online at: www.microhotplate.com/pd-kmhp-100.cfm