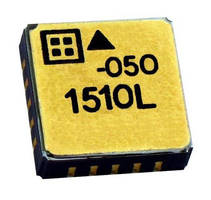 Design of the SDI Model 1510 Series incorporates a micromachined variable capacitive sensing element and custom integrated circuit. The accelerometer produces two analog voltages which vary proportionately according to measured acceleration levels. Series units respond to either AC or DC acceleration, with choice of either +4V differential or 0.5 to 4.5V single ended output. Both outputs read nominally at +2.5 volts (at zero acceleration).

The SDI Model 1510 Series is both nitrogen damped and hermetically sealed. Two reference voltages, +5.0 and +2.5 volts (nominal), are required. The output scale factor is ratiometric to the +5 VDC 6 mA (typical) reference voltage. Sensitive axis is perpendicular to the bottom of the LCC package. Units are RoHS compliant and can reliably operate over a standard temperature range of -40° to +85°C. As a MEMS-based device, the Model 1510 Series is also insensitive to temperature changes and gradients, with a signal output that is further unaffected by electromagnetic interference, and requiring no warm-up period.

Series units are available in standard measurement ranges from ±5 g to ±100 g, with corresponding nominal frequency response from 0 to 600 Hz (±5 g) to 0 to 2500 Hz (±100 g). Low-to-medium sized quantities of the SDI Model 1510 Series are immediately available for customer shipment. OEM volumes are available in as short as three weeks from receipt of an SDI acknowledged purchase order.

For more information about the Model 1510 Series or other MEMS VC accelerometers available from Silicon Designs, please contact the company at +1.425.391.8329, via email at sales@silicondesigns.com or visit www.silicondesigns.com.
Share