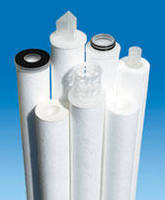 All Stratum Series filters are constructed with a proprietary "Cactus Core" that immobilizes the media and prevents unloading of captured contaminant. The multi-zone, graded pore structure excels in both on-stream life and flow versus the commonly available graded density products. Dirt holding capacity advantages of as much as 30% to 200% have been shown in laboratory testing. Customers confirm this outstanding performance in real world applications.