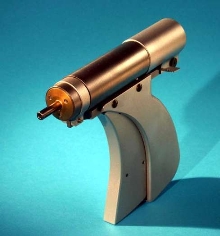 Measuring 7/8 in. dia x 5 in. with 1Â½ in. stroke, PowerCylinder(TM) can be driven in 2 ways. With manual operation, handle with 4-bar linkage is coupled with PowerCylinder to deliver 3,000 lb of force from 50 lb grip. As mechatronic unit, closed-loop stepper motor/ball screw modulates PowerCylinder to deliver 3,000 lb of force for braking or control surface applications. Automatic, resistance-regulated, 3-speed transmission trades-off speed of ram's advance for force.

The PowerCylinder features an automatic resistance regulated three-speed transmission that trades-off speed of the ram's advance for force. Available as an OEM device, the PowerCylinder(TM) offers plug-in simplicity for product design and ease of maintenance.

LatchTool has pioneered the development of the PowerCylinder(TM); establishing a new product category with its first introduction of a mechanical force amplifier. Internal geometries can be modified for custom amplification. The Company plans to introduce additional dimensioned PowerCylinders as the demand for various metrics become clear. Design services are available. Contact LatchTool Group at 719-488-8800.
Share