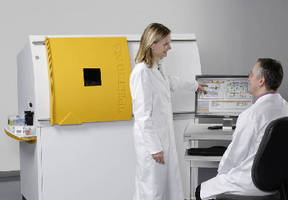 MAHWAH, NEW JERSEY- With the launch of the SPECTRO MS at the 2010 Pittsburgh Conference this March, SPECTRO Analytical Instruments introduces the first fully simultaneous measuring mass spectrometer with inductively coupled plasma (ICP-MS; see "Background" section) in the world. The SPECTRO MS records the entire elemental spectrum between lithium and uranium for every analysis. Users achieve a greatly increased sample throughput rate and much better precision and accuracy compared to using a sequential mass spectrometer.

"The SPECTRO MS changes mass spectrometry forever. The option of being able to measure simultaneously will create a revolution in the market similar to the one that resulted from the introduction of optical emission spectrometers several years ago," notes Manfred Bergsch, Managing Director for SPECTRO.

"The SPECTRO MS delivers not only more precise and reproducible results than a conventional mass spectrometer but also measures a great deal faster; opening new perspectives and applications for laboratories," adds Bergsch.

The SPECTRO-MS' simultaneous recording of the entire spectrum is enabled by a series of newly designed high-end components: