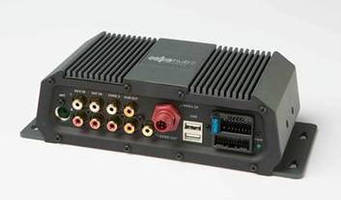 “Helping anglers enjoy their time on the water has always been our top priority,” said Leif Ottosson, CEO of Navico. “Our multifunction displays offer an efficient and user-friendly interface for navigation, radar and sonar information. With SonicHub2, we offer boaters an integrated, high-quality audio entertainment solution for the complete boating experience.”

Navico research and development was instrumental in developing the NMEA 2000® Entertainment protocol for marine accessory manufacturers. The protocol will be used to connect, control and monitor any audio-visual source with any controlling device such as a multifunction display, personal computer, smartphone or tablet. In addition to playing songs, radio stations and video, the protocol allows for standardization of other entertainment functions such as: file status queries, independent sound zone control, system configuration status, pre-defined and user-defined equalizer pre-sets, access to playable files library, USB access and organization, Sirius® XM radio sourcing, personal playlist recall and editing, audio-video library search, saving of favorites, and Bluetooth device connection and source status.

The Lowrance SonicHub2 blackbox is priced at $329 USD and includes two Lowrance-branded 200-Watt, two-way, 6.5-inch marine-grade speakers. SonicHub2 is available from authorized distributors throughout the U.S. and Canada.

For more information on the Lowrance SonicHub2, the HDS line of products or the entire Lowrance line of marine electronics or to locate an authorized Lowrance dealer, please visit www.lowrance.com.