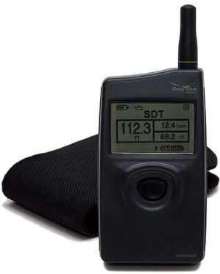 Part of Deep Blue Marine BlueNet Wireless onboard network, handheld mobile display wirelessly communicates with sensors that monitor speed, water depth and temperature, as well as length of anchor chain deployed. Luminous display, used at helm or any other onboard location, features menus that allow deep and shallow water alarms to be set. Speed, depth, and temperature sensors are contained in one element requiring thru-hull fixture.

Ascend Marine announces the North American availability of the new Deep Blue Marine BlueNet Wireless onboard network. Immediately available is the new handheld Mobile Display that wirelessly communicates with sensors that monitor speed, depth and water temperature as well as calculate the length of anchor chain deployed. A primary objective of the wireless system is to reduce the cost and difficulty of wiring electronic systems within an existing vessel. The BlueNet Wireless system uses sophisticated coding techniques to avoid interference with appliances and other wireless systems on board the boat.

The Mobile Display is a portable, handheld, luminous display and is powered by two rechargeable Nickel Metal Hydride AAA batteries. An external power adapter/charger is available. The unit is designed to be used at the helm or at any other onboard location.

The Mobile Display, when used with the BlueNet Speed, Depth and Temperature sensor, provides user selectable menu screens to allow a wide variety of data formats. Menus also allow deep and shallow water alarms to be set. Adjustments can be made to allow depth to be measured from the surface, from the hull or from a deeper point, possibly below the keel or running gear. Distance logs are also included to record short- and long- range travel distances. English and metric measurements are selectable. All three sensors (speed, depth and temp) are contained in one element requiring only one thru-hull fixture.

The BlueNet Chain Counter is a microprocessor-based system that calculates the amount of anchor rode deployed. Color codes or chain markings are no longer needed. Now it is possible to stand at the windlass with the Mobile Display in hand and monitor the anchor chain as it is deployed or retrieved.

The Chain Counter system consists of a sensor that installs at the windlass and sends measurement information to a Chain Counter Blue Box Controller. The Blue Box then transmits the chain information wirelessly to the Mobile Display. Any size windlass can be used and the system is independent of windlass brands. English and metric units are supported.

The Mobile Display retails for $389 while the Speed, Depth and Temperature sensor is $469 and the Chain Counter is $329. One Mobile Display can be used with both systems. Five languages are supported.

More information on the entire product range can be found at www.deepblue.ch.

The Deep Blue Marine BlueNet Wireless onboard network of products can be viewed along with the Anchor Alert at the upcoming Miami International Boat Show in Ascend Marine's booth, #4415.
Share