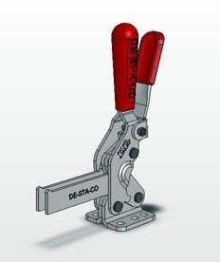 Toggle-Lock Plus Clamps help to maintain over-center toggle position in applications where there is likely to be movement or vibrations, such as transfer lines. Eliminating pinch points, units feature bushings at major pivot points and stop point locations at base. Spindle contacts workpiece in vertical position to help stop marring or movement, while clamping arm completely clears workpiece to facilitate load and unload.

Designed with maximum safety and ergonomic benefits as its foundation, Toggle-Lock Plus clamps help to maintain the over-center toggle position in applications where there is apt to be movement or vibrations such as transfer lines. In addition, higher levels of reliability are achieved with the new Toggle-Lock Plus when moving a fixture from point A to point B or where an entire component is being relocated.

"Our new Toggle Lock Plus expansion will add to our time-tested product lines focused on providing increased productivity and cost-reduction to our customers," says Tom Stimac, Product Manager, DE-STA-CO Industrial Products Group. "Our Toggle Lock Plus is just one of many innovations making the best even better. We will continue to develop further expansions to this new patented lean clamp series in order to provide our customers more options to help them improve productivity and reduce cost."