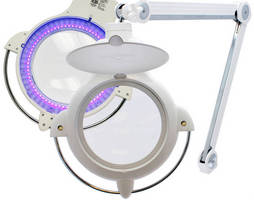 
Include Model with UV/Bright White LEDs

A touch-sensitive switch allows three-stage intensity control of the magnifying lamps. A spring-balanced arm extends 35 inches and remains fixed in any position for hands-free magnification.

"Being able to easily position the lenses and light exactly where needed is an significant time-saver, especially in high-volume lab and industrial settings," says Mike Shahpurwala, president of Aven, a Michigan-based manufacturer of optical instruments and precision tools. "ProVue Touch supports efficiency and reduces user fatigue."

ProVue Touch Magnifying Lamps operate at 110 or 220 volts. Its patented design features a white ABS plastic housing and enclosed springs for a sleek, contemporary appearance. A heavy-duty metal clamp secures the lamp to the edge of a workbench, desktop, table or counter up to 3.5 inches thick.

Though a protective lens cover reduces damage risk, the lens is removable if replacement is needed.

An electronics innovator since 1983, Aven is located in a high-tech corridor of Southeast Michigan and is the parent company of SharpVue, which designs and manufactures integrated digital microscope technology.
Share