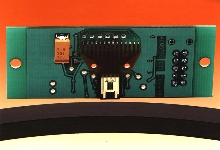 The new magnetic encoder kits consist of a custom-configured magnetic encoder wheel and a matched magneto resistive sensor with line-driver outputs for two incremental channels in quadrature. Three-channel versions (with marker) are available as Series EK6310.

The new encoder kits are available with wheel diameters from 210 (8.25 in) to 250 (10 in.) mm and inside diameters sized to fit the application. Customized units are also available. The encoder provides resolution up to 4500 CPR, performance not previously available and 10 times the resolution of comparable gear-tooth sensors in the same application.

Admotec also manufactures other high performance motion and position sensing devices including the Rotasyn(TM) solid-rotor resolver for high speed applications, the EK500 Series for harsh environments and the FM700 Series flat magnetic encoders. Technical data is available at www.admotec.com. Admotec is headquartered in Lebanon, N.H. and has offices in Zurich, Switzerland, serving the European marketplace.
Share