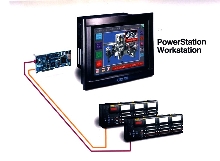 MachineLogic(TM) Slot Card Runtime has IEC 61131 programming languages, simultaneous communications between DeviceNet or Profibus fieldbus I/O and Ethernet I/O, and its own processor and real-time operating system for deterministic, real-time performance. Card continues to run even if host computer is re-booted. Programming is via MachineLogic environment that has 5 different IEC 61131 shop-floor programming languages, including ladder logic.

MILFORD, OH (March 2002) - Parker CTC is set to provide machine builders with a package of PC-based control capabilities, never before available on a PCI card. The new MachineLogic(TM) Slot Card Runtime combines PC openness with PLC reliability and out-specs even "higher-end" PLC and PC controls with such standard offerings as simultaneous communications, full IEC 61131 programming language compliance, massive program size, and 16K of I/O. It can be paired with software and hardware modules from CTC for a one-source bundled solution to machine control, all sharing a single "one world" development environment.

Delivering the fail-safe reliability of a PLC for critical machine applications, the Slot Card control has its own processor and real-time operating system for deterministic, real-time performance, regardless of the host PC's operating system or HMI system. The design allows the MachineLogic card to continue to run even if the host computer is re-booted. In addition, the OPC Server connectivity will allow any Windows based application (HMI, SCADA, VBA, etc.) to run without affecting the performance of the control system.

For unmatched integration ease, the Slot Card control is paired with MachineShop application development software and CTC's Interact HMI software - all sharing a single "one world" development environment. Whether the new MachineLogic Slot Card Runtime or CTC's previously released MachineLogic PC Runtime solution is implemented, the same MachineShop development suite is used for programming. Fully IEC 61131-3 compliant, the MachineLogic programming environment provides five different shop-floor programming languages, including ladder logic. This minimizes changes in converting to PC control and allows OEMs to cover the full spectrum of machine control needs without having to do separate development for each, often in different programming languages.

Both versions of MachineLogic -Slot Card Runtime and PC Runtime -deliver true real time performance like a PLC, while doing multi-tasking like a PC and providing the flexibility and connectivity for enterprise integration. A preemptive, multi-tasking kernel gives highest priority to control in performing up to 16 simultaneous tasks.

CTC also bundles MachineLogic with a comprehensive range of PowerStation workstations - from 6" replacement push-button panel replacement to 15" flat panel displays. This gives OEMs the efficiencies and simplicity of a single source for software/hardware solutions to machine control needs.

For more than 20 years CTC has been designing, manufacturing, and marketing both hardware and software to provide factory-floor, machine-operator-interface solutions for automation projects worldwide. In 1998, CTC became a unit of the Parker Hannifin Corporation (NYSE:PH), Cleveland, Ohio. The industrial manufacturer is the largest provider of motion control solutions in the world.
Share