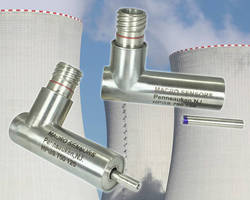 The screw-on radial connector of the HPGS Series LVDT sensor provides a secure connection, enabling the position sensor to withstand constant, heavy vibration resulting in increased productivity and reduced downtime for repairs.   In addition, the connector offers a through-bore design that permits access to either end of the LVDT core for better mechanical support and core guidance as well as easier cleanout in dusty or dirty locations.  The radial connector also gives the HPGS Series LVDTs a shorter installed length compared to units of the same range with axial connectors, enabling its use where space is limited.

More information on the HPGS Series Hermetically Sealed, High Temperature LVDT Linear Position Sensor, refer to the web site at http://www.macrosensors.com/HPGS_AC_LVDT_750.html or by contacting the company at sales@macrosensors.com