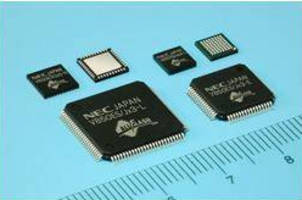 NEC Electronics today announced 78 new 32-bit All Flash® V850ES/Jx3 series microcontrollers (MCUs) with industry's leading low power consumption, optimized pin counts and expanded functionality. The new MCUs are ideal for compact, battery-driven systems such as polyphase electricity meters and handheld terminals, connected devices such as USB2.0 PC peripherals and healthcare equipment, as well as industrial Ethernet systems. This new lineup provides a complete platform approach for system designers, allowing them to choose the optimum configuration from a single family for their complete range of applications. In addition, by sharing the same architecture, the new MCUs enable easy migration of software and hardware for the system designers, contributing to faster time-to market for system designers at low cost.

Operating at 20 MHz, the new V850ES/Jx3-L MCUs require only 0.9 milliwatts per million instructions per second (mW/MIPS), offering approximately 60 percent reduction over the company's existing MCUs that require 1.7 mW/MIPS. The V850ES/Jx3-L MCUs offer a wealth of features that include up to 512 kilobytes (KB) of flash memory and optional on-chip USB 2.0 controllers, and still they consume only about 0.7 µA during standby mode (when real-time counter is operating). Featuring the industry's leading low power consumption, the new MCUs realize longer life for battery-driven systems. This new low power MCU lineup also offers RTC with independent power supply pins as well as increased number of serial interfaces.

In addition to the standard QFP (Quad Flat Package) packages, the 40-pin MCUs are equipped with 6 mm × 6 mm × 0.75 mm QFN package and the 48-pin MCUs are equipped in 7 mm × 7mm × 0.75 mm QFN packages. By employing QFN packages, NEC Electronics succeeded in reducing the number of external pins by 50 percent and the package thickness by 46 percent, thereby achieving an 82 percent smaller package size compared to the company's existing MCUs. For even smaller and thinner applications, a lineup of BGA (Ball Grid Array) packages is available. The body sizes of these BGA packages range from 5mm × 5mm or 6mm × 6mm for packages with 64-pins to 8mm × 8mm for packages with 113-pins, which reduce space requirements and enable system designers to develop compact systems.

With the addition of the new chips, the V850ES/Jx3 series now includes 117 MCUs with flash memory ranging from 16 KB to 1 megabyte, packages from 40 to 144 pins and also includes USB2.0 Host & Function in the V850ES/Jx3-H and V850ES/Jx3-U series, and embedded Ethernet MAC in the V850ES/Jx3-E series. NEC Electronics' whole V850 series now covers the entire range in operating frequencies from 20 MHz to 200 MHz, with all of the new MCUs sharing the same architecture and yet offering new functions and circuit optimizations. This makes it easier for the system designers to leverage their existing software resources as they add new products, thereby facilitating the overall development process at low-cost.

Combined with highly reliable flash security functions and unrivalled quality, NEC Electronics believes that this new lineup of MCUs will provide its customers a more competitive edge in battery driven products and connected electronics. The company remains committed to further expansion of its lineup of power-efficient 32-bit MCUs.

The sample prices of these new products vary depending on memory capacity, package type, and number of pins. For example, the 40-pin V850ES/JC3-L MCU with 16 KB of Flash memory and 8 KB of RAM, equipped on a QFN package is priced at US$2 per unit. Mass production of these new products is scheduled to begin in June 2010 and is expected to reach a monthly production of 5,000,000 units by 2011. More information about NEC Electronics' extensive MCU product offerings can be found at here.

All Flash is a trademark of NEC Electronics Corporation in Japan and other countries. SuperFlash memory technology used in NEC Electronics' 32-bit devices is licensed from Silicon Storage Technology Inc. SuperFlash is registered of Silicon Storage Technology in the U.S., Japan, and other countries. All other registered trademarks or trademarks are the property of their respective owners.