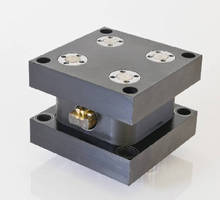 Using 12.5 cm cells, which can be connected in various ways to form wall of nearly any size, M=WALL offers data measurement across 5 axes. Cells measure distribution of force during crash in 3 directions as well as torque. With M=BUS plug-in system, all cells can be connected to one another or exchanged, and position of cells can be automatically detected within system. Primary applications include structural analysis of vehicle bodies and assessment of vehicle compatibility in crashes.


Munich, - Munich-based MESSRING, the world's leading crash test equipment manufacturer, has launched a completely new load cell wall. The M=WALL offers additional ways to collect data and vehicle crash test results with a degree of
accuracy that has never been seen before. It will primarily be used for the structural
analysis of vehicle bodies and to assess vehicle compatibility in crashes. The newly
developed load cell wall differs from both previous models and all other products on the market in three key ways: It offers data measurement across a total of five axes (up until now the maximum was three), data acquisition integrated into the cells, and a userfriendly cell plug-in connection using the M=BUS system. "Because of its design, the new load cell wall offers an additional dimension of data. And it is easier to use in every way, which means it can be operated more quickly," says Dierk Arp, CEO of
MESSRING, speaking about the benefits of the M=WALL.

The newly developed 12.5 cm cells, which can be connected in various ways to form a
wall of nearly any size, constitute the central element of the innovative wall. Not only do the new cells measure the distribution of force during a crash in three directions (straight ahead in the direction of the vehicle's movement as well as vertically and horizontally), but they also measure torque. In this context, the sensors incorporate five axes in their representation of impact energy, presenting a significantly more accurate image of a vehicle crash into the load cell wall. Among other uses, the additional data collected helps to determine the compatibility of vehicles in the event of a crash - a topic of increasing importance given the numerous different types of vehicle on the international market.

The measuring principle of the M=WALL provides a much more accurate spatial
resolution on the 125 mm cells than comparable products. The positional resolution
records the exact center of the forces generated on impact. The wall's sensors are also
extremely robust and can even provide measurements when a force of up to 400
kilonewtons (kN) is applied.

A significant benefit of the M=WALL is its user-friendly operation, since data collection is integrated into the individual cells. Thanks to the M=BUS system, all of the cells can be connected to one another quickly or even exchanged, should a cell need to be recalibrated. Furthermore, the M=BUS concept makes it possible to automatically detect the position of the cells within the entire system. This new level of flexibility saves testers a significant amount of time during everyday use while unlocking new possibilities - the cells can be used to simulate a curb crash, for example. Such an application can be achieved by arranging the 12.5 cm cells in a line on the floor.

The sensors in the wall can be arranged in any way before ordering to set up the
desired area for any type of test. MESSRING can also ship the walls with custom
setups, for example to carry out EURO NCAP offset tests. Popular wall sizes include 2 x
1 m (16 x 8 cells) and 1 x 1 m (8 x 8 cells).

The main areas of application for the new product include analyzing the structure of
vehicle bodies and assessing the compatibility and impact behavior of different vehicles in the event of an accident. Structural analyses focus on identifying and eliminating weak spots in the construction of automobiles. Vehicle compatibility focuses on the question of how auto body structures behave when cars of different heights crash into one another in frontal or side collisions, for example when a compact car collides with an SUV. Due to the increasingly stringent regulations of the US NHTSA, the issue of compatibility is becoming an important criterion for testers and body manufacturers of all vehicle brands that offer their products worldwide.

From MESSRING's point of view, the new wall represents another quantum leap in
development. In any case, the technology has seen enormous changes since the
introduction of the first load cell wall in the 1970s. Wolfgang Rohleder, Sales and
Applications Manager at MESSRING, confirms: "Sensors used to be much larger, which
meant the test results were much less accurate. And wiring the cells together was a
daunting task." The new M=WALL is not only the most accurate load cell wall
MESSRING has ever developed, but is also the wall that can be configured in the least
time. It is therefore no surprise that initial orders are already rolling in, with the new M=WALL to be installed in the crash test facility of IAV Fahrzeugsicherheit GmbH & Co. KG in Gifhorn, Lower Saxony, as well as in a new crash test facility in Shanghai, China.

MESSRING Systembau GmbH from Munich is the worldwide leading manufacturer of
crash test facilities and their components. The middle-sized company designs and builds
turnkey test sites for customers in all relevant markets and on nearly every continent. So far, over 90 large crash test facilities have been finalized by MESSRING for automobile manufacturers, insurance companies or state-run facilities - more than any other company. The world market leader repeatedly surprises with innovative advances or pioneering new solutions, not only in the construction of the facilities and in the actual data acquisitioning but also in the documenting and recording of individual tests.