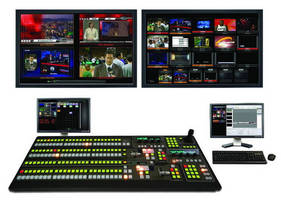 Granite(TM) 6000 consists of 2 M/E control panel with rows of 24 buttons for accelerated access to as many sources (32 with Shift). Dual banks of device controls enable running of built-in clip store, Harris or Chyron CG, and control cameras/streamers. Also included, 142 PixButtons(TM) can dynamically display sources and file names on buttons for switching clarity. Operators can set up shots using off-air M/E and transition to them, combine them, or produce 2 different productions concurrently.

Billerica, Massachusetts -- At IBC2011, Broadcast Pix(TM) will introduce the largest member of its family of integrated live video productions systems, Granite(TM) 6000, which features an expanded 2 M/E control panel. The new control panel has rows of 24 buttons for rapid access to more sources, as well as two banks of device controls to run the built-in clip store, Harris or Chyron CG, and control cameras and streamers. The new system will be on display at IBC, which runs 9-13 Sept. at the RAI Centre in Amsterdam (Stand 7.B20).

The panel has a record 142 PixButtons(TM), the patented Broadcast Pix invention that dynamically displays sources and file names on the buttons, allowing directors to switch with confidence. The panel has 24 source selection buttons, and can access up to 32 with shift. The new control panel also features a dedicated row of PixButtons for Fluent(TM) Macros, which combine sophisticated switcher effects and files with one-button recall.

Granite 6000 is a fraction of the cost of a conventional 2 M/E suite with separate switcher, clip store, and CG. And because of its tight integration, it can be operated by fewer people. It brings 2 M/E sophistication to productions that could not previously consider it. Operators can set up sophisticated looks using the off-air M/E and easily transition to them, combine them, or produce two different productions simultaneously, such as one for broadcast and one for the Internet, or drive a dual-screen production.

Granite's built-in clip store integrates up to 120 hours of H.264 and ProRes clips with audio, as well as graphics stores and CG. The server also provides a customizable Fluent-View display for up to four monitors to show video, clips, and keys. Fluent workflow enables files and data to flow into the server from all parts of the studio. The system has many levels of redundancy, including redundant power in the switcher and panel, redundant switching, redundant control surfaces, and can also be fitted with RAID 10 storage, adding redundancy to the clip store.

Granite 6000 will be available in September either as a new system or as a panel upgrade to any existing Granite system.

About Broadcast Pix Broadcast Pix is the leader in integrated live video production systems. Its systems provide the best control surface for combining cameras, clips and graphics to create compelling live video. These surfaces enable total control of the built-in multi-format switcher, clip store, graphics system with a Harris or Chyron CG, and device controls. Its Fluent(TM) workflow enables files and data to be easily incorporated from other parts of the studio. Broadcast Pix systems are a fraction of the cost of a conventional control room to buy, staff and operate. Systems are available in both HD/SD Granite and SD/analog/HD Slate systems. They range from small systems controlled by a touch-screen to sophisticated 2 M/E control panels. Customers include leading broadcast, corporate, education, religious, government, webcast, entertainment and mobile studios worldwide. Learn more at www.broadcastpix.com.