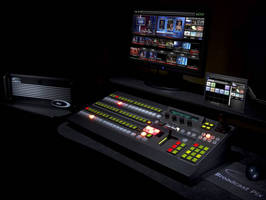 "With Mica, you pay for a switcher and get an HD control room. Our system is so well integrated that a solo operator can combine cameras, clips, and graphics to create compelling live video," said Ken Swanton, president of Broadcast Pix. "Mica was a big hit with international audiences when we introduced it at IBC in Amsterdam this month, and we already have units being shipped to U.S. customers."

One of the first customers to purchase Mica is Tualatin Valley Community TV (TVCTV), which manages the PEG (public, educational, and governmental) access channels that serve 14 communities near Beaverton, Ore. TVCTV produces more than 400 programs a year, and is transitioning to HD production in its new facility. Its two new Mica systems will provide the same production platform in both control rooms of its new facility.

"We're very excited about Mica. It allows us to expand, but keeps us within budget. Ultimately, it will save us money," explained Thaddeus Girard, production services manager, TVCTV. "With so many tools in one system, Mica will allow us to create more powerful videos with smaller crews. For one person to control this whole operation is huge. Producers can fire off high-quality, dynamic shows using macros and easily add production value."

The Powerful Punch Tour began mid-September and will stop in a number of cities over the next few months. All registered attendees will be entered in a drawing to win an iPad 2, and there will be additional giveaways at each location. Registration for the Powerful Punch Tour is free, but space is limited at each venue. To pre-register for a specific tour stop, please visit www.broadcastpix.com/Powerful-Punch-Tour.html.

Upcoming tour dates for the Powerful Punch Tour include:

Housed in a single 4 RU case, Mica includes a multi-definition switcher that can mix eight HD/SD-SDI inputs with seven channels of internal clips, animations, and graphics. There is support for up to six keyers and DVEs, six HD/SD-SDI outputs, and two DVI outputs. It also includes a 30-hour clip store and a Harris or optional Chyron character generator.

Four Mica models are available. Mica Desktop is controlled through a touch screen or mouse interface, while Mica 500 includes a control surface with a patented device control section. Mica 1000 and Mica 2000, with larger and more powerful control panels, sport patented PixButtons, which dynamically display sources and devices in the button to switch with confidence.

About Broadcast Pix Broadcast Pix is the leader in integrated live video production systems. Its systems provide the best control surface for combining cameras, clips and graphics to create compelling live video. These surfaces enable total control of the built-in multi-format switcher, clip store, graphics system with a Harris or Chyron CG, and device controls. Its Fluent(TM) workflow enables files and data to be easily incorporated from other parts of the studio. Broadcast Pix systems are a fraction of the cost of a conventional control room to buy, staff and operate. System range from small systems controlled by a touch-screen to sophisticated 2 M/E control panels. Customers include leading broadcast, corporate, education, religious, government, webcast, entertainment and mobile studios in more than 80 countries. Learn more at www.broadcastpix.com.