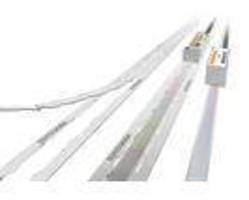 
FASTRACK is a revolutionary track-mounted linear encoder scale system from Renishaw that combines ±5 µm/m accuracy, with the ruggedness of stainless steel, and the quick and easy installation of a carrier-type encoder system.

Designed for applications that demand high accuracy and easily removable scale, the FASTRACK scale system consists of two miniature, yet rugged, guide rails. These securely retain Renishaw's new low-profile scales (8 x 0.2 mm cross-section) and allow them to freely expand at their own thermal expansion coefficient with almost zero hysteresis (sub-micron on a centre-clamped 2 metre axis over the entire operating temperature range, for example). If damaged, the scale can be pulled out of the guide rails and quickly replaced, even where access is limited, thus reducing machine downtime.

Easy installation, easy scale replacement
The FASTRACK linear encoder scale system also offers unrivalled ease of installation. The self-adhesive guide rails feature integral pre-aligned sacrificial spacers which are removed with a hand-held tool after fitment to the axis. The scale is then fed in from either end and locked to the substrate at a single datum point anywhere along the axis using cyano-acrylate glue. For TONiC RTLC incremental scale installations, limit magnets and a reference mark selector (RTLC scale features multiple IN-TRAC(TM) reference marks at regular spacings) can also be fitted to the FASTRACK and a bolted clamp is available as an alternative to using glue.

Available on reels for 'cut-to-suit' flexibility at the point of installation, FASTRACK allows machine builders to minimise both stock and lead-times. Measuring and cutting has been made simple, quick and easy by generous tolerances and a bench-mounted guillotine (also available from Renishaw). This flexibility makes the new linear encoder scale system ideal for large machines that need to be sectioned for transportation to their installation site: simply use separate sections of FASTRACK and allow the scale to run across the joins (the gaps can be up to 25 mm), safe in the knowledge that the scale can be installed, removed and re-installed as many times as required.

Wide range of applications
The FASTRACK linear encoder scale system is suitable for many applications, such as FPD manufacturing machines, linear motors with aluminium substrates, P-V manufacturing, axes that are exposed to potential damage, large CMMs and other machines that require the scale to be installed/removed for transit, or simply for any application where thermal expansion of the scale must be independent of the machine structure.

As with all Renishaw encoders, the new FASTRACK system is backed by a truly responsive global sales and support network. Like Renishaw's TONiC and RESOLUTE encoder systems, it also satisfies the highest environmental standards, with both WEEE and RoHS compliance.