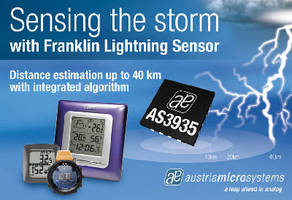 Equipped with RF receiver, AS3935 Franklin Lightning Sensor detects electrical emissions from lightning activity. Proprietary algorithm, drawing on meteorological survey data, produces estimated distance-to-storm calculation from 40 km down to 1 km, while rejecting disturbances from man-made signals such as motors and microwave ovens. Housed in 4 x 4 mm 16-pin MLPQ package with current consumption of 60 ÂµA, IC can be integrated into variety of portable/outdoor devices.


The revolutionary AS3935 Franklin Lightning Sensor is capable of detecting lightning up to 40 km away.

The AS3935 Franklin Lightning Sensor utilizes a sensitive RF receiver that detects the electrical emissions from lightning activity. A proprietary algorithm in the AS3935 then converts the RF signal into an estimation of the distance to the head of the storm. The algorithm, which draws on extensive meteorological survey data, produces an estimated distance-to-storm calculation from 40 km down to 1 km, while rejecting disturbances from man-made signals such as motors and microwave ovens.

Portable lightning sensors can play a crucial role in keeping people from harm and protecting equipment from damage in locations that are prone to violent lightning storms. Humans can typically hear thunder at a distance of about 10 km. This often leaves too little time to find shelter from a fast-moving, highly active electrical storm. In the case of being on a golf course or a baseball field, the extra time that a lightning sensor can provide could mean the difference between life and death.

The national weather service agencies today utilize sophisticated, large pole-mounted fixed sensors, but portable lightning sensing equipment is not widely used by consumers or businesses today because it is cumbersome, inaccurate and prone to false alerts from man-made signals.

With the introduction of the revolutionary AS3935 Franklin Lightning Sensor it is now possible for the first time to incorporate this innovative sensor technology into a wide variety of portable devices. With multiple low-power modes, a listening mode current consumption of 60 µA and housed in a 4 mm x 4 mm 16-pin MLPQ package, the AS3935 can easily be integrated into a variety of portable or outdoor devices targeting biking, hiking, marine, golfing, sporting events such as football, soccer and baseball. It can also be used for in-building equipment, including, uninteruptible power supplies (UPS), power conditioners, telcom equipment, intelligent networks and smart grids needing early detection for surge prevention.

A typical application for the AS3935 requires only a simple microcontroller with a SPI or I2C interface and seven passive components, allowing it to easily fit in a space about the size of an automobile keychain remote.

With extensive field trials conducted in Finland and the US (Florida), the AS3935 Franklin Lightning Sensor showed good correlation when compared to the larger, more complex systems. "Based upon field trials conducted by Florida Tech, preliminary results of studies conducted in Florida and in Finland show that the austriamicrosystems' lightning sensor has the potential to be used as a lightning early warning system that could augment other methods such as the 30-30 (1) rule for lightning safety" said Dr. Joseph Dwyer, Professor, Department of Physics and Space Sciences, Florida Institute of Technology, one of the world's leading research institutions in the field of lightning physics.

Bruce Ulrich, Wireless Product Line Director at austriamicrosystems said: "This innovative, highly-integrated sensor was designed with intelligence and low power capabilities that make it suitable for a variety of low-power portable & fixed products requiring very little board space. It is now possible to protect both humans and equipment from harm by providing early warning of impending danger. I have personally seen little league baseball teams in danger because the umpire did not have enough information to call-the-game because of lightning; now there is a way to provide that protection."

The AS3935 Franklin Lightning Sensor IC is available for sampling today. For more information on the AS3935, please visit www.austriamicrosystems.com/Lightning-Sensor/AS3935

austriamicrosystems is a leading designer and manufacturer of high performance analog ICs, combining 30 years of analog design know-how with state-of-the-art manufacturing and test facilities and production partnerships. austriamicrosystems leverages its expertise in low power and high accuracy to provide industry-leading standard and customized analog products. Operating worldwide with more than 1,200 employees, austriamicrosystems focuses on the areas of power management, sensors & sensor interfaces and mobile infotainment in its markets Consumer & Communications, Industry & Medical and Automotive. Through the acquisition of TAOS, a world leader in advanced light sensors, austriamicrosystems has expanded its innovative sensor offering for growth markets such as mobile devices. austriamicrosystems is listed on the SIX Swiss Exchange in Zurich (ticker: AMS). For more information, please visit www.austriamicrosystems.com
Share