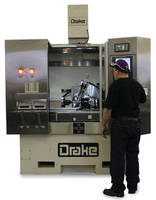 Illuminated LumenrailÂ® lighted handrail product group comprises LED components and metal for assembly of lighted railing systems. Klik(TM) System's LEDPOD, individual LED lighting fixture, snaps into 1 Â½-2 3/8 in. round handrail or guard top rail section and produces illumination in asymmetric or symmetrical distribution. There is no need to tilt handrail, eliminating unwanted glare, and heat sink solves problem of heat on glass lens and handrail, which does not exceed 35Â°.

MILWAUKEE, WI - Wagner Architectural Systems has announced the addition of a new component for their illuminated Lumenrail® lighted handrail product group -- the Klik System's LEDPOD. Wagner will be the sole distributor for this product in North America.

The Klik System's LEDPOD is an individual LED lighting fixture which is designed to snap into a 1-1/2 inch to 2-3/8 inch round handrail or guard top rail section -- no threading is required. The LEDPOD illuminates in either an asymmetric or symmetrical distribution without the need to tilt the handrail thus eliminating unwanted glare. A key advantage of the Klik LEDPOD is its suitability for use in curved railings.

Klik Systems is an Australian company which has been supplying custom linear lights to architects and designers for over 25 years. Their LEDs for 'Luminous' at Darling Quarter Sydney - billed as the world's largest digital art façade covering 557 windows - grabbed headlines around the world earlier this year. Based outside Sydney in Eastern Creek, Klik Systems was also involved with SPARC lighting design, part of the VIVID Sydney 2012 festival. "We're tremendously pleased to be working with Wagner," said Klik's marketing manager, Cliff Hadley. "They're a terrific presence in the USA market and we're looking forward to a long and fruitful collaboration." "It was important to us to have the luminaire located out of view under the handrail, effectively lighting the stairs/walkway with good vertical illumination, whilst minimizing glare," says Cliff Hadley. "LEDPOD is particularly useful where no overhead lighting is possible."

Patrick Hutchinson, Director of Wagner Architectural Systems, is also pleased with this new, international partnership. "We couldn't be more excited about our relationship with Klik," said Mr. Hutchinson. "They are a fabulous organization and there is tremendous cultural alignment between our firms. Partnering Klik's vast lighting experience with Wagner's metals capabilities provides unparalleled advantage to ornamental metals designers and users as well as an exceptional platform for creative lighting design. Together we have very high expectations for a bright future."

The LEDPOD fixture fits flush into handrails of any size, and has a sleek contemporary aesthetic. The LED's asymmetrical optical system (patent pending) was designed using Photopia software and totally eliminates glare. A specially designed heat sink solved the problem of heat on the glass lens and handrail - which does not exceed 35 degrees. Installation and maintenance is made effortlessly simple with a retaining spring system, which also has a patent pending. "The LEDPOD is installed by means of a simple push, and a quarter turn will remove it, minimizing any twisting of the cabling. There's virtually zero chance of damaging the luminaire or handrail tube." Says Hadley.

For more information the Klik LEDPOD or other products and services, visit www.klikledpod.com or www.wagnerarchitectural.com, or call (888) 243-6914.

Wagner Architectural Systems is the custom railing system division of The Wagner Companies. Their focus is on contemporary railing systems featuring Lumenrail LED components, cable railing, Archimesh® woven wire, and glass railing. The Wagner Companies has been in the metal business since 1850 as a manufacturer of handrail fittings and metal products for architectural and industrial applications. The main product lines include: Architectural Catalog, Architectural Railing Solutions and Industrial Original Equipment Manufacturer (OEM) products. Wagner offers laser, water jet, bending, stamping and finishing capabilities as well as engineering assistance. Wagner has a large inventory of raw materials and over 7,800 stock items in steel, brass, bronze, aluminum, and stainless steel.
Share