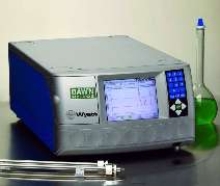 (SANTA BARBARA, CALIFORNIA-March 11, 2005) - Wyatt Technology, the world leader in absolute macromolecular characterization instrumentation and software, last week announced the launch of its revolutionary DAWN HELEOS Multi-Angle Light Scattering (MALS) Detector. The DAWN HELEOS was introduced at Pittcon 2005, where it was nominated by the attending journalists for the Pittcon Editors' Award, an award which honors the most innovative new instrument introduction at the show. The new generation detector can incorporate both MALS and QELS (Quasi-Elastic Light Scattering) into a single unit. Offering more than twice the sensitivity of Wyatt's highly successful DAWN EOS, the new HELEOS is the most sensitive on-line light scattering instrument in existence.

Wyatt's DAWN HELEOS is the only light scattering detector in the world capable of achieving a dynamic range of 126 dB, enabling the instrument to virtually never go off scale. This results in faster sample runs, offering a wider range of sample concentrations than ever previously attained. The instrument also utilizes a new 24 bit A/D measurement system, with separate A/Ds for each detector channel. This provides the same high sensitivity over the entire range of scattering intensities, rendering post-detector amplifiers unnecessary.

By utilizing the DAWN HELEOS, the light scattering process is simplified, allowing the regulation of measurements to be completely automated. By incorporating an air cooled Peltier to temperature-regulate the sample, the process can operate at temperatures between 0ºC and 150ºC, thus achieving a stability that is greater than 0.01ºC. Furthermore, the HELEOS is able to operate on a corporate network due to its Ethernet interface, thus allowing the user to control or view the status of the instrument from multiple locations.

The DAWN HELEOS can be incorporated seamlessly with all other Wyatt instruments, such as the ViscoStar differential bridge viscometer, via the network or USB interfaces. It has the capability of taking signals from a variety of third party instruments, such as UV absorption, DRI, IR absorption, evaporative light scattering or photodiode array detectors.

Wyatt Technology, the inventor of the world's first MALS instrument has applied its 20 years of experience into the development and manufacturing of light scattering equipment, to further demonstrate its commitment to the field of absolute macromolecular characterization. The DAWN HELEOS represents a new generation of light scattering instrumentation, providing absolute measurements for results of the highest accuracy for use in the biotechnology, chemical, petrochemical and pharmaceutical industries.

About Wyatt Based in Santa Barbara, California, Wyatt Technology is the world's leading provider of instruments for absolute macromolecular characterization. With over 35 years' experience developing multi-angle light scattering detectors, working with customers in the biotechnology, chemical, petrochemical, pharmaceutical, academic and government arenas, Wyatt prides itself on its entrepreneurial spirit, and the uniqueness of its offerings. The Company's groundbreaking technology and uncompromising levels of customer care make Wyatt the global hallmark in its field. For more information, please visit www.wyatt.com
Share