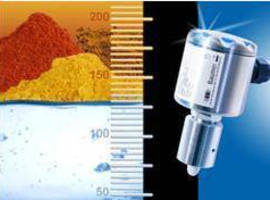 Compliant with FDA and EHEDG demands, FlexLevel Switch 4401 detects level of liquids, viscous fluids, and dry media. Blue light on top shows when media is detected, and can be seen even if sensor is mounted on top of tank. Featuring acid-proof stainless steel or PEEK thermoplastic wetted parts, switch is suited for hygienic applications. It can be connected to PC and configured via FlexProgrammer 9701, enabling visual fine-adjustment as well as gating out or zooming in on certain medium.