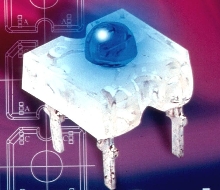 Ultra-Flux Grid LED modules measure 67.62 mm square, and plug into any 0.200 in. pin space with zero clearance between each device. Available in high intensity Super Red and Green, Ultra Yellow, Ultra Orange, and Blue, they feature peak wavelengths of 470-660nm. Applications include signs, truck side lights, moving messages, and other displays.

The new LED Modules measure only 67.62mm square, and plug into any standard 0.200" pin space with zero clearance between each device, offering maximum density and space savings. Available in all industry-standard colors, the new LED Modules are ideally suited for signs, automotive tail or stop lights, truck side lights, stadium scoreboards, moving messages, and other large, outdoor applications where high brightness is required.

American Bright's new Ultra-Flux Grid Clusters are immediately available from stock or within four to five weeks and are priced from under $0.20 each in large quantities. Technical support is available Monday through Friday at 1-888-533-0800. Immediate product specifications can be seen on the company's web site at www.americanbrightled.com.
Share