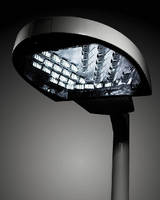 Enhanced product attributes and benefits include:

o Increased Efficacy: Up to 50% increased efficacy with all Type II, III, IV, and V models now >50 LPW, as required by many local utility rebate programs.

o Thermal Management: Designed with a Dual Thermal Management System, conduction and
convection, to absorb and dissipate heat, and introducing an exclusive LifeShield Protection System monitor to maintain lumen loss depreciation to less than 15% at 100,000 hours of operation (based on IESNA LM-79 and LM-80) in extreme and fluctuating environmental conditions without overheating or failing.

Kim Lighting is the world's foremost designer and manufacturer of quality, high-performance outdoor architectural and landscape lighting products. These include roadway, pedestrian, low-level and buildingmounted solutions for contemporary or traditional commercial, industrial and institutional applications. Kim Lighting is committed to the advancements of solid-state lighting and the future advancements of
renewable energy sources. Kim Lighting, an affiliate of Hubbell Lighting, Inc., was founded in 1934 and is based in City of Industry, Calif.
Share