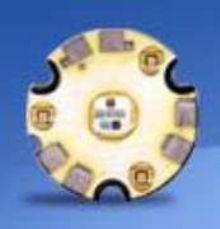 Anchoring the BL-4000 series are an RGB (red-green-blue) light engine producing up to 16 million blended colors - including white with variable color temperature - and a 5,500°K white-only light engine with a color rendition index (CRI) of 78. The RGB is immediately available worldwide from Lamina distributors (see list); white and monochromatic colors will be available within 60 days. All are designed for popular drive currents, feature integrated protection from electrostatic discharge (ESD), an isolated metal base for wiring on a common heat sink in either series or parallel and compatibility with many popular LED optics.

"As the market leader in the development and manufacture of super-bright LED arrays, Lamina Ceramics is proud to once again advance the state of the art with the launch of our BL-4000 series," said Taylor Adair, president and CEO. "The many user-friendly features our engineers incorporated into these exciting devices will greatly benefit luminaire manufacturers and ultimately lighting designers and architects."

Lamina's BL-4000 line pushes solid state lighting to center stage by making possible applications which until now could only be accomplished with traditional lighting sources, and by creating many entirely new lighting opportunities. Over the last 6 months, the company set two successive world records for brightness with its Aterion LED light engines in RGB and white - the brightest LED arrays ever produced - at 13,300 and 28,000 lumens, respectively.

"With it's 3 independently controlled, mixed and fully-dimmable color channels, the BL-4000 RGB+ opens up a huge new world of design possibilities for architainment and architectural lighting," noted Jim Anderson, Lamina's vice president of marketing. "Designers and lighting architects can now provide decorative and accent lighting in 16 million colors and at any brightness level. These tiny but powerful light engines can be used individually, or chained together in series or parallel circuits. They're also naturals for LCD display backlighting, signaling applications and signage."

120 lumens of white lights the way
While Lamina's BL-4000 series monochromatic LED light engines paint with light in red, green, blue and amber, the BL-4000 white light engine provides a daylight color temperature of 5,550°K with a color rendition index (CRI) of 78, rivaling the quality of natural sunlight. This fully-dimmable LED light engine is extremely long-lived, and is therefore suitable for many architectural lighting applications, desk lamps and machine vision as well as for flashlights.

About Lamina Ceramics, Inc.
Founded in 2001, Lamina Ceramics defines the state of technology in the development and manufacture of super-bright LED arrays. As the market's leader, the company's Aterion LED light engines are the world record-holders for brightness. Lamina's LED packaging technology and design with its proprietary multi-layer ceramic on metal packaging provides unsurpassed thermal management and interconnectivity. Lamina's technology was twelve years in development by Sarnoff Corporation.