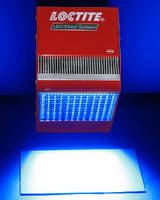 Rocky Hill, Conn. - Henkel Corporation has introduced the Loctite(R) LED Flood System, a self-contained, air-cooled assembly designed to cure Loctite(R) UV/Visible cure adhesives. The system delivers a curing area of 100 x 100 mm at intensities of up to 600 mW/cm2, depending on the wavelength selected. Unlike traditional arc lamps, this LED system has a significantly longer life, negligible intensity decay, and no infrared emissions that can overheat parts.

Unlike competitive LED flood systems, which claim high intensities at the lamp face, the Loctite(R) system has an array of individually reflectorized LEDs, optimally focused for maximum intensity at a 50-100 mm working distance. With proper handling, this cure system offers an expected life of more than 20,000 hours. Designed to stack together to create an extended blanket of light, the Loctite(R) LED Flood System is available in three different wavelengths -- 375 nm, 405 nm or Indigo(TM) (visible blue) -- to match the adhesive's cure requirements.

For more information on the Loctite(R) LED Flood System, call 1-800-LOCTITE (562-8483) or visit the company's website at www.equipment.loctite.com.

Henkel has been committed to making people's lives easier, better and more beautiful for more than 130 years. A Fortune Global 500 and Germany's most admired company according to a recent Fortune survey, Henkel offers strong brands and technologies in three areas of competence: Home Care, Personal Care and Adhesive Technologies. Each day, more than 50,000 employees worldwide are dedicated to fulfilling Henkel's claim "A Brand like a Friend". In fiscal 2009, Henkel generated sales of 13,573 million euros and adjusted operating profit of 1,364 million euros.