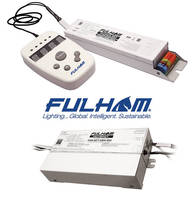 Hawthorne, CA – Fulham, Co. Inc. today announced that they will be introducing a new line of DALI and 0-10V programmable LED drivers and a new LED driver / emergency battery pack combo product at LIGHTFAIR International between May 5th and May 7th 2015.

New ThoroLED™ Programmable LED Drivers are offered with a unique hand-held programmer that can set different current outputs for the drivers being used in luminaires – right on the production line bench – either stand-alone or connected to a computer. The new drivers provide for bill-of-material and stocking simplification, lower cost and stream-lined inventories to OEM lighting fixture manufacturers.

The new HotSpot™ “All-In-One” LED Driver / Emergency Battery Pack provides an easy-to-install solution for LED luminaire manufacturers that need stand-by battery back-up in case of power interruption while lowering the total installed cost, by simplifying installation and wiring. Fully compatible components ensure complete interoperability and that luminaires will have the highest quality and performance. The product is backed by Fulham’s 5-year warranty.

“Fulham has entered a new era of innovation and design, and these new products reflect that progression for the company,” stated Bob Howard-Anderson, President and CEO of Fulham.   “Adding programmability, addressability and controllability is part of our overall strategy to bring more intelligence to our LED drivers, modules and engines, as well as to our new, industry-leading LED emergency lighting products and solutions. Further, our updated corporate identity reflects the forward-looking approach we are taking to innovative product development and solving customers’ needs.

Fulham will be showcasing these and other new products, along with its new look and image as a company, in New York City from May 5th through the 7th at LIGHTFAIR International at the Javits Convention Center, Booth #1957.
Share