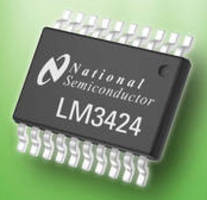 Offered in 20-pin thermally enhanced TSSOP, LM3424 drives up to 18 high-brightness LEDs in series with output current above 2 A (typ). It contains all features to regulate currents based on buck, boost, SEPIC, flyback, and buck-boost topologies. Temperature management control, thermal foldback, accelerates and facilitates design of thermal system. It lets lighting designers can program temperature and slope breakpoints within which LEDs operate safely.

Thermal foldback combats high temperatures LEDs can reach as a result of environmental conditions. When LED temperatures rise above a safe threshold, the lifetime and efficacy of the LED decreases. With the LM3424, lighting designers can program temperature and slope breakpoints within which the LEDs operate safely. When an over-temperature condition occurs, the LM3424's thermal foldback circuitry reduces the regulated current through the LEDs. The reduced current dims the LED to a range programmed by the designer and the LED remains within the range until it returns to a safe operating temperature.

This method of thermal foldback maintains the lifetime and efficacy of the LED and ensures the warranty period of fixtures in applications such as automotive headlights, high bay warehouse lighting and street lighting.

Technical Features of National's LM3424 LED Driver
Offered in a 20-pin thermally enhanced TSSOP package, the LM3424 drives up to 18 high-brightness LEDs in series with output current above 2A in a typical application. It contains all of the features to regulate currents based on buck, boost, SEPIC, flyback and buck-boost topologies.

The LM3424 operates over a wide input range of 4.5V to 75V. The pulse-width modulation (PWM) controller is designed for high-speed capability including an oscillator frequency range that can be synchronized up to 2.0 MHz. Additional features include PWM and analog dimming, programmable softstart and protection features such as low-power and thermal shutdown, and cycle-by-cycle current limit.

For more information or to order samples and an evaluation board, visit www.national.com/pf/LM/LM3424.html.

Availability and Pricing
Available now, National's LM3424 and is priced at $1.75 in 1,000-unit quantities. More information about National's LED drivers is available at www.national.com/analog/led.

About National Semiconductor
National Semiconductor is a leader in analog power management technology. Its products include easy-to-use integrated circuits, PowerWise products that enable more energy-efficient systems, and SolarMagic(TM) products which improve the energy output of solar arrays. The company celebrates its 50th anniversary this year. Headquartered in Santa Clara, Calif., National reported sales of $1.46 billion for fiscal 2009. Additional information is available at www.national.com.