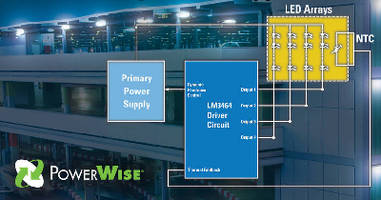 Unlike traditional high-brightness LED drivers that drive current to each string independently, the LM3464 LED driver includes four channels to drive up to 20 LEDs per channel, reducing system complexity and cost.

The LM3464 is a high-voltage current controller with four individual current regulator channels. It works in conjunction with external N-channel MOSFETs and sense resistors to accurately drive current to each LED string. The LM3464 features a wide input voltage range up to 80V to drive multiple LEDs per string, making the LM3464 ideal for LED-intensive applications.

The dynamic headroom control feature monitors the forward voltages of the LED strings and dynamically adjusts the LED supply voltage through the power supply feedback to the lowest level required. By directly controlling the output of the offline regulator, the LM3464 can eliminate the second stage switching regulator commonly required for offline LED power supplies.

Offered in a 28-pin thermally enhanced TSSOP package, the LM3464 is available for design on National's WEBENCH® LED Designer at www.national.com/analog/webench.

For more information or to order samples, visit www.national.com/pf/LM/LM3464.html.

National's LM3464 is priced at $4.50 in 1,000-unit quantities. Samples are available now with production quantities available in June, 2010. More information about National's lighting products is available at www.national.com/analog/led.

National Semiconductor is a leader in analog power management technology. Its products include easy-to-use integrated circuits, PowerWise products that enable more energy-efficient systems, and SolarMagic products which improve the energy output of solar arrays. The company celebrated its 50th anniversary last May. Headquartered in Santa Clara, Calif., National reported sales of $1.46 billion for fiscal 2009. Additional information is available at www.national.com.