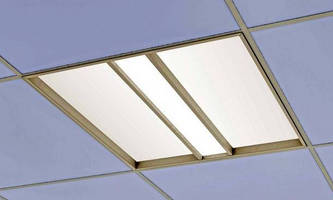 Product Description: abacus1 Series is immediately notable for its no-glare, extraordinarily even direct downlight. Equally noted is the luminaire’s shallow four-inch-deep downlight housing design that complements acoustic ceiling-tile patterns. It is adaptable vertically or horizontally along any common, flat T-Bar “drop-ceiling” or acoustical grid-ceiling panels in any size space; especially those with shallow or “crowded” ceiling plenums. Luminaires are available as 2-ft. x 2-ft., or 2-ft. x 4-ft.

LED boards are designed and manufactured in-house. They use precisely-binned Nichia® diodes on high-quality, aluminum-clad boards designed for maximum heat dissipation. Appropriate thermal controls ensure proper fixture performance. The manufacture by a•light of their own boards allows shorter lead times, greater quality control and cost-competitiveness. It also enables greater flexibility in quickly updating/revising specifications based on new technology. All luminaires and LED boards are made in America in the company’s own modern plant.

Contact Information: Learn more about abacus1 Series and other a•light advanced-design, energy-conserving interior and exterior lighting products by visiting: www.alights.com. a•light is located in its own new architect-designed plant and office building at 3728 Maritime Way, Oceanside, California 92056 and is a division of AmerillumBrands. Telephone: (760) 727-7675. Fax: (760) 727-7695. E-mail: mdale@amerillumbrands.com.
Share