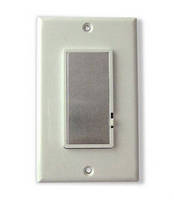 San Francisco, CA - Elemental LED, a San Francisco Bay Area-based lighting retailer, has released two new 12V LED dimmer products, expanding the style choice, usability and wattage of LED dimmers currently on the market. With the release of the Reign Touch 12V LED Dimmer and the PWM Injector, the company's LED dimmer switch offerings lead the way for innovation and retail offerings of these products. Sleek style choices, 0-100% dimming capability and wattage expandability are all corners stones to the selection of LED dimmers at Elemental LED.

The new Reign Touch LED Dimmer houses a touch-sensitive aluminum pad that provides the user with a flexible, dynamic interface to dim LED lights. Tap the pad quickly with the tip of a finger to turn the lights on or off. Touch and hold a finger lightly to increase the lights' brightness. This touch dimmer also features a discreet on/off toggle switch and a smooth dimming range, from 100% down to 0%, with no flickering, humming or jumping.

The Reign Touch LED Dimmer was engineered by and is manufactured exclusively for Elemental LED. All of the Reign LED Dimmer Switches, also offered in Full, Rocker and Button Slide styles, fit into standard wall light switch boxes and are connected between a standard 12V power supply and an LED lighting fixture. They will dim any dimmable LED light sold by Elemental LED. The Reign LED Dimmer Switches are ETL Certified.

The new PWM (Pulse Width Modulation) Injector, also engineered by and manufactured exclusively for Elemental LED, doubles LED dimmer capacity. The PWM Injector makes it possible to draw an additional 60 watts out of an LED dimmer switch, allowing users to attach twice as many dimmable LED lights to the same switch. The PWM Injector works with all of the Reign LED Dimmer Switches, including the Touch Dimmer.

The 60W safety limit of the Reign LED Dimmer Switches was one of its biggest practical drawbacks. The PWM Injector eliminates this: Customers can now expand their LED lighting installations as much as they require, because the PWM Injector is opto-isolated and regenerated. Several PWM Injectors can be attached to the same Reign LED Switch, and control the signal when multiplied over long distances.

The Reign Touch LED Dimmer and the PWM Injector are now available through Elemental LED. To learn more about these and other LED dimmer products, please visit www.elementalled.com.
Share