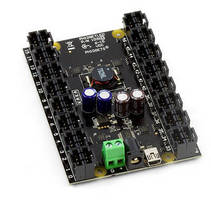 1031- PhidgetLED-64 Advanced: the Easy Way to Play with all Sorts of LED Indicators of all Colors


Supports LEDs from Infrared to Ultraviolet, and LEDs requiring 20mA to 80mA.

"With our previous product we had solved the ease of use issue but with support for a limited types of LEDs. The 1031 supports Blue, UltraViolet and White LEDs on top of the Red, Orange, Yellow and Green LEDs that worked with the 1030." says Chester Fitchett, CEO of Phidgets. "We are also providing better brightness control". Added Chester.

"The Product ships with a 12VDC, 2Amp power supply and LED cables; everything you need to get going is in the box. All you have to get are your favorite LEDs." added Bernard Rousseau, Director of Marketing.

Phidgets, Inc. is a technology leader in the design and manufacture of low-cost control and sensing modules connected to personal computers through the USB port. Phidgets products are ideally suited for fast prototyping. The privately held company is based in Calgary, Alberta, Canada.