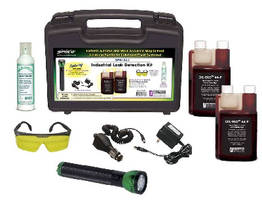 
Westbury, New York-Spectronics Corporation has introduced the OPK-341 Industrial Leak Detection Kit, an effective and efficient way to pinpoint the exact source of all fluid leaks in hydraulic equipment, compressors, engines, gearboxes, fuel and other synthetic and petroleum-based industrial systems.

At the core of the kit is the OPTIMAX(TM) 3000 - a cordless, rechargeable, super-powerful blue light LED inspection flashlight. It's 15 times brighter than regular LED flashlights and has an inspection range of up to 20 feet (6.1 m). Powered by a rechargeable NiMH battery, the flashlight has an LED life of 50,000 hours.

Also included in the kit are two 16 oz, twin-neck bottles of patented OIL-GLO(TM) 44 concentrated fluorescent oil dye, which is compatible with all synthetic and petroleum-based fluids. When a leaking industrial system is scanned with the OPTIMAX(TM) 3000 flashlight, the dye glows brightly to reveal the precise location of the leaks each and every time!

Rounding out the kit is an 8 oz spray bottle of GLO-AWAY(TM) dye cleaner, smart AC and DC chargers, and fluorescence-enhancing glasses. All components are packed in a rugged carrying case.