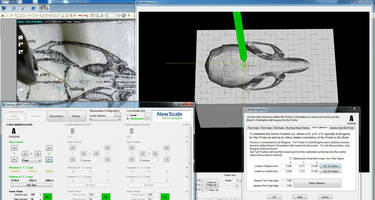 The software allows control of multiple probes within a common stereotactic coordinate space. It ensures that all probes follow the desired approach angles and insertion trajectories to reach target points in the brain atlas. The result is highly accurate positioning with less time spent on geometry calculations and set-up, and more time on actual experiments. It is compatible with probes from imec (Neuropixels), NeuroNexus, Cambridge Neurotech and more.

“The Virtual Coordinate System takes the hassle out of multi-probe alignment by allowing each probe to be automatically registered to a 2D image or a 3D reference space,” said Josh Siegle of The Allen Institute for Brain Science. “Through a simple calibration procedure, the software learns the relative offset and orientation of each probe to the virtual coordinate space. Afterwards, the position of each probe is displayed within the new coordinate system. Furthermore, each probe moves within this global space, rather than along its local axes. This makes it much easier to keep track of probe locations when many are in use simultaneously.”

Home calibration before each experiment compensates for any misalignments that may have occurred during stereotactic surgery. Prior to the experiment, all probes are calibrated to the VCS reference space. A single measurement, typically the XYZ offset of a skull landmark such as bregma or lambda, is required for the final alignment.

“Using the VCS system to align the probes and calculate entry points was super useful, and setting the manipulators to the desired starting position the night prior saved a lot of time during actual experiments,” said Tobi Leva of The Max Delbrück Center for Molecular Medicine (MDC) in the Helmholtz Association in Berlin. “With the ability to calibrate the probes to lambda and bregma for each experiment, I could reconstruct the insertion path from previous recordings. I was really happy with the accuracy and reproducibility.”

Users can simulate the motorized motion of all probes using a 3D visualization in the software. They can check for potential interference, make any adjustments, and re-simulate.

The VCS software was developed by New Scale Technologies’ motion control experts and extensively tested at leading neuroscience research labs. This release of the VCS software is supported on both inverted and upright MPM System configurations.

About the Multi-Probe Micromanipulator (MPM) System
The Multi-Probe Micromanipulator (MPM) System, introduced in 2016, is the only manipulator developed specifically for high-density silicon neural probes including imec Neuropixels, NeuroNexus and Cambridge Neurotech probes. The MPM System’s compact design enables close spacing of multiple probes. Each probe arm has four degrees of freedom for manual positioning of the polar and approach angles and starting position of the probe tip, and three axes of motorized motion for fine positioning and probe insertion.

Users control the motorized motion of multiple probes on a single PC, with a joystick or mouse. With the new VCS software, all probes move in a common set of stereotactic coordinates aligned to the target brain atlas. A local mode allows each probe to be moved along its own XYZ coordinates if needed.