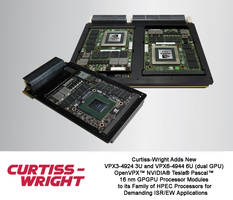 “With these latest additions to our family of NVIDIA Pascal-based modules, Curtiss-Wright continues our commitment to being the proven and trusted HPEC solution provider, enabling our ISR/EW customers to achieve their parallelization objectives and maximize their performance per watt”, said Lynn Bamford, Senior Vice President and General Manager, Defense Solution division. “The Tesla P6-based VPX3-4924 and VPX6-4944 GPGPU modules, with their large 16 GB DMA BAR memory per GPU, deliver unmatched communications in support of I/O intensive HPEC applications such as sensor fusion or large swath video mapping. Even better, our OpenHPEC Accelerator Suite of software tools reduces program risk for developing complex GPGPU HPEC systems, greatly expediting the time between development and deployment.”

The VPX3-4924 and VPX6-4944 modules are fully interoperable with Curtiss-Wright’s broad family of system-level C4ISR/EW OpenVPX solutions, such as the Xilinx® FPGA-based VPX3-534/535 3U modules, and the Intel® Xeon®-D processor-based CHAMP-XD1 single processor 3U and CHAMP-XD2 dual processor 6U DSP modules. Numerous system configurations can be formed using combinations of these boards. For example, a single CHAMP-XD2 node can be used to control both Tesla P6 GPUs on a VPX6-4944, or each node on a CHAMP-XD2 can be mapped to each individual GPU. Taking this design one step further, a single Xeon-D on the CHAMP-XD2 can control one VPX6-4944 board upstream, while the other Xeon-D maps to a second VPX6-4944 module downstream. This processing slice, consisting of a CHAMP-XD2 and two VPX6-4944 modules, delivers an impressive 25 TFLOPS of performance that can be connected to the rest of the system via 40 GB Ethernet/InfiniBand ports on the OpenVPX data plane.

Curtiss-Wright HPEC modules and systems are supported by the OpenHPEC Accelerator Suite of best-in-class software development tools. These powerful tools enable system developers to achieve their software implementation faster. For example, the suite includes the powerful Bright Cluster Manager from Bright Computing, an NVIDIA partner. Bright Cluster Manager provisions and monitors both the CPU and GPU boards, and includes a fully configurable module environment. The OpenHPEC tool suite includes Bright’s deep learning libraries and tools from both Intel and NVIDIA, including Caffe and TensorFlow. It also provides the Arm Forge which enables true system level debugging and profiling for both CPU and GPUs, and supports MPI, OpenMP and ACC.

Resulting from its Reseller Agreement with WOLF Advanced Technology, the high-performance VPX3-4924 and VPX6-4944 HPEC modules have been pre-validated. They complement Curtiss-Wright’s previously announced family of NVIDIA Pascal GPGPU modules by speeding and easing the integration of HPEC solutions into deployed systems.

Curtiss-Wright Corporation is a global innovative company that delivers highly engineered, critical function products and services to the commercial, industrial, defense and energy markets. Building on the heritage of Glenn Curtiss and the Wright brothers, Curtiss-Wright has a long tradition of providing reliable solutions through trusted customer relationships. The company employs approximately 8,600 people worldwide. For more information, visit www.curtisswright.com.