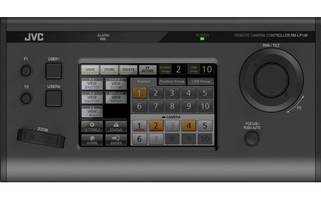 The V-60HD switcher converts tally signals from its RS-232 port and sends them via LAN to the RM-LP100 controller, which distributes them to the KY-PZ100 PTZ production camera and other IP-enabled ProHD, 4KCAM, and CONNECTED CAM models. By sending tally information through the LAN port, users eliminate the need for separate tally cables between the switcher and cameras, which simplifies installations and streamlines workflows.

The RM-LP100 is a key component of JVC’s S.L.I.M. studio system for affordable multi-camera production, because it acts as a virtual CCU for any JVC IP-enabled camera. It provides control of basic camera settings including white balance, iris, shading, record functions, and more.

“JVC’s S.L.I.M. studio solution is ideal for multi-camera productions with limited budgets and limited control room space, such as schools, houses of worship, or any facility with multiple PTZ cameras,” explained Craig Yanagi, national marketing manager. “We are very proud of our collaboration with Roland. The seamless integration between their six-input V-60HD switcher and our cameras, along with the ability to deliver tally signals without additional wiring, gives smaller operations truly professional functionality.”

Designed for live event production and broadcast, the V-60HD supports SDI camera inputs as well as scaled HDMI inputs for data, computer, and other video sources. It offers both a program and an independent AUX bus, which can be used for confidence/presenter note monitoring, downstage monitoring, or side screens. The V-60HD also features advanced audio functionality, including multi-channel embedded audio, XLR/TRS and RCA analog inputs, and multi-channel embedded audio to two SDI outputs, as well as comprehensive dynamics and auto-mixing.

With its joystick and zoom rocker, the RM-LP100 provides smooth and precise camera movements for the KY-PZ100 PTZ camera. One RM-LP100 can control up to 100 cameras and store up to 100 presets. The controller also features user assignable function keys and focus dial with push-auto function, and its seven-inch touchscreen panel provides control of camera groups, presets, and camera settings.

The new firmware upgrade for the RM-LP100 is free for existing customers and will be available for download at pro.jvc.com later this month.

ABOUT JVC PROFESSIONAL VIDEO
Headquartered in Wayne, New Jersey, JVC Professional Video is a division of JVCKENWOOD USA Corporation, a wholly-owned subsidiary of JVCKENWOOD Corporation. The company is a leading manufacturer and distributor of broadcast and professional video equipment, as well as D-ILA front projection systems. For more information, visit JVC’s website at http://pro.jvc.com or call (800) 582 5825.