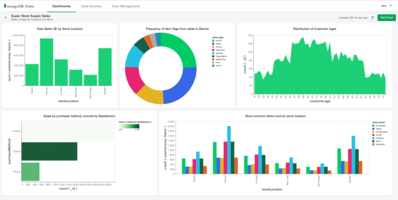 The MonoDB Charts Data Visualization Tool is included in the cloud database-as-a-service MonoDB Atlas. The charts enable user to quickly create and share data visualizations with team members without the need for writing code. These charts support document model and provides the team members with the ability to explore and visualize data for number of business tasks, regardless of their skill set or physical location. They allow customers to manage users and permissions at single place.

Because MongoDB Charts natively supports the document model, it removes the complexity of visualizing hierarchical JSON data and users do not require any engineering knowledge into how the data was structured to build real-time visualizations that inform business decisions. Previously, the rich data commonly found in modern applications required intense data modeling in order to produce data visualizations. With MongoDB Charts, it’s only a matter of clicks.

MongoDB Charts on MongoDB Atlas, which runs on Amazon Web Services, Microsoft Azure and Google Cloud Platform, democratizes data access by giving all team members the ability to explore and visualize data for any number of business tasks, regardless of their skill set or physical location. Now, customers will be able to manage users and permissions in one place because MongoDB Charts is now fully integrated with MongoDB Atlas. Furthermore, no effort is required to set up and onboard data sources into MongoDB Charts on MongoDB Atlas. Users merely need to select a data collection from an Atlas cluster and they can begin building charts, reports and dashboards.

“The vast majority of tools in the business intelligence space struggle with handling rich, JSON data that is becoming increasingly common in modern applications. This not only makes it difficult to extract real time insights, but puts a technical hurdle in front of non-technical teams because there was no easy way to create data visualization without writing code,” said Dr. Grigori Melnik, Vice President of Product, Server and Enterprise Tools, MongoDB. “MongoDB Charts on MongoDB Atlas completely eliminates this technical burden and brings fast, data-driven insights to every member of an organization. That’s a relief both for the teams that need access, and for the technical employees that used to have to serve as gatekeepers to an organization’s data.”

Intelligent applications that provide real time graphs, maps and charts are becoming the status quo and an expectation of the developers that build applications. In 2019, MongoDB Charts will add an embedding feature that will allow developers to create visualizations and embed them in external websites or applications.

MongoDB is the leading modern, general purpose database platform, designed to unleash the power of software and data for developers and the applications they build. Headquartered in New York, MongoDB has more than 8,300 customers in over 100 countries. The MongoDB database platform has been downloaded over 45 million times and there have been more than one million MongoDB University registrations.