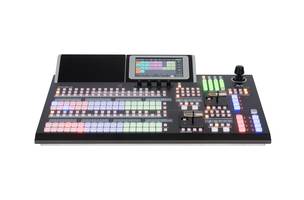 “NAB New York is an important show to FOR-A America,” said Ken Truong, President, FOR-A Corporation of America. “The show is an excellent opportunity to engage with our system integration partners, our family of end users and prospective customers. A regional show allows us an additional opportunity to meet with everyone who was not able to attend the NAB Show in Las Vegas. We look forward to showcasing some of our most popular and latest technology at NAB New York.”

The compact HVS-490 provides users with event memory, macro functions, integrated frame synchronizers and video processors on all inputs, with three multi-viewers available via the HDMI 2.0b output to 4K monitors - making it easy to set up quickly for live performances. The HVS-490 has a new suggested list price of $29,000 in the U.S.

At NAB New York, FOR-A will also provide demonstrations of the ClassX (CG) content creation and graphics playout solution. ClassX is a dedicated broadcast solution for 2D/3D character generation, live motion and play out graphics with numerous layers available. Support for NDI is standard. ClassX is integrated with all of FOR-A’s HANABI production video switchers. ClassX’ graphics suite is popular worldwide with universities, digital signage, live event, and sports production applications. FOR-A is the exclusive distributor of ClassX in North, Central and South America. Suggested list price starts at $9,900 in the U.S.

FOR-A will conduct live demonstrations of the latest FOR-A partnership with Variant Systems Group (VSG). Variant’s Envivo Replay is a complete replay solution packaged with an intuitive touch screen user interface that can be learned how to use in 20 minutes. Envivo Replay is being used by several major broadcasters and universities for slow motion replay applications. Integration with all of FOR-A’s HANABI production switchers comes standard.

Highlights of Replay include:

Plan a visit to FOR-A’s NAB New York booth to see this unique sports replay solution in action, with promotional pricing (valid through Dec 31, 2018) of $22,000 in the U.S. with four input and two output channels. FOR-A America is the exclusive distributor of Envivo Replay in the U.S. and Canada, along with Central and South Americas.