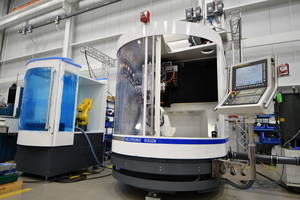 In addition to speed, the new robots handle an increased number of workpieces/tools, are more compact and consume less energy. They also support the latest WALTER HELITRONIC Tool Studio and Robot Manager software that allows users to load multiple trays with various workpiece diameters for lights out unattended production.

To allow for retrofitting modern automation when rebuilding the machines, WALTER reengineered and reconfigured its controls because the original offering lacked the functionality to support today’s robots. Now, as part of a rebuild, UNITED GRINDING outfits machines with the new FANUC CNC as well as all new electrics (FANUC drives and motors) that accommodate the robots and all necessary software.

The new FANUC CNC extends machine lifespan as well as adds features, functions and convenience. They can provide user-friendly conversational programming and advanced functions available on a machine that reached the market before these operator-oriented approaches debuted.

The primary benefit of rebuilding existing equipment through UNITED GRINDING North America Rebuild Department is cost. On average, a rebuilt grinding machine costs roughly 75% of new equipment. Once rebuilt, a machine looks, works and produces like new, with recommissioned geometry, renewed guideways and enhanced precision. Plus, depending on how a company classifies expenses, a rebuilt machine may qualify as a maintenance cost rather than as capital outlay, further contributing to potential savings.

About UNITED GRINDING Group
With a turnover of around 700 million euros, the UNITED GRINDING Group is one of the world's leading manufacturers of precision machines for grinding, eroding, lasering, measuring and combination machining. With its eight company brands MÄGERLE, BLOHM, JUNG, STUDER, SCHAUDT, MIKROSA, WALTER and EWAG, UNITED GRINDING offers a broad application knowledge, an extensive product portfolio and a complete array of services on the international market. The Group employs a workforce of around 2500 employees and more than 20 production, service and sales locations and agencies throughout the world.