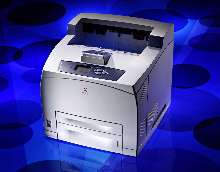 The Phaser 4500 is the fastest laser printer in its class, offering 36 pages per minute, true 1200 dpi at rated speed, an eight second first-page-out time and edge-to-edge printing. Its sturdy design is capable of high-capacity, workhorse printing. A 400 MHz processor allows a wide range of file types and sizes to be processed quickly and efficiently. Additionally, like other Xerox black-and-white printers, the Phaser 4500 offers genuine Adobe PostScript 3. These capabilities combine to provide small and midsized customers the ability to achieve greater levels of productivity and reliability.

"We set out to design an affordable printer that didn't require a compromise on quality or features," said Emerson Fullwood, president, Xerox Channels Group. "We've delivered with the Phaser 4500. At a low price it offers rock-solid reliability while providing customers exceptional productivity."

In addition to faster speeds, improvements in the controller make the Phaser 4500 the most intelligent printer in its class. Intelligence features include:

o An automated installation tool for easy setup
o A Xerox-exclusive Configuration Card contains the printer's feature set and network settings. Encrypted for security, the postage stamp-sized card is easy to access, facilitates fast and simple upgrades, and can help shorten service calls.
o Smart paper trays that sense paper size and automatically match the requirements of the print application
o Enhanced PrintingScout warns the user if any problems occur during printing
o Job completion notification at the desktop
o Consumables usage visibility at the driver and configuration page, so users are not caught by surprise when running low on paper or toner
o Custom size paper handling with the ability to save pre-defined types so users don't have to re-enter size information when using custom media

XEROX®, The Document Company®, Phaser® and the digital X® are trademarks of XEROX CORPORATION.
Share