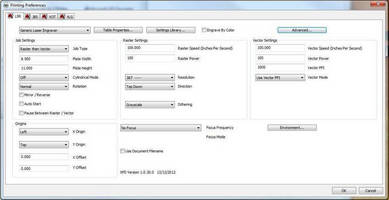 
Xenetech has released version 1.0 of the new laser print driver for all Xenetech systems including the Aurora, XLT, XLE, and Duo models.  This product represents a three year “ground up” rewrite of Xenetech’s driver to work in 64 and 32 bit operating systems for output of third party software such as CorelDraw™.

“We started with a clean slate, seeking broad customer and distributor input and designed a product that would be the optimal laser print driver,” stated Xenetech Software Development Manger Cary Johnston.  “This driver efficiently performs all typical functions, but also goes well beyond with significantly increased control and functionality.  We worked hard on turning laser users’ dreams into reality.”

The new driver will contain all of the functionality of industry standard laser print drivers, and with the addition of many new and industry-first features.  Xenetech’s new laser driver will provide laser customers with:

- Full engrave-by-color capability with the ability to set resolutions and dither patterns by color; as well as control of black percentage within a color; and setting “footprints” which controls engraving in multiple layers;

- Full page rotation and mirroring control within the driver;

- An assortment of error diffusion and ordered dithering for processing photographs;

- Material and color setting library with the ability to save all settings in job profiles;

Johnston revealed that the new driver has been tested at a number of sites around the world and customers have provided very positive feedback regarding the versatility, utility, and reliability of the driver.  Xenetech customers can learn more about the driver as well as how to acquire a copy by visiting the Xenetech website at www.xenetech.com, emailing tech@xenetech.com, or calling Xenetech at 225-752-0225.