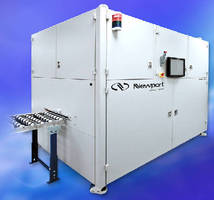 As the latest addition to Newport's broad portfolio of photovoltaic manufacturing and test solutions, it joins the SolaryX family of laser scribe tools, lasers for thin-film scribing and patterning, automated PV I-V test stations, and solar simulators. SolaryX Edge systems have shipped to customers in the U.S. and are currently operational in plants manufacturing thin-film solar panels.