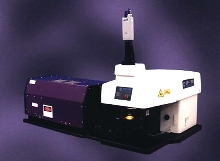 Fremont, Calif., March 25, 2002 - New Wave Research has unveiled the UP193-BT, a benchtop excimer-based laser ablation system for solid sampling introduction to ICP, ICP-MS, noble gas MS and stable isotope MS instruments of all makes and models. Its high energy density (35J/cm2) at the sample, flat beam and short 193 nm wavelength make it ideal for opaque and highly transmissive materials alike. The user can target micro-features such as defects and inclusions with spots down to 4-micron diameter. The control software offers a wide variety of ablation methods such as depth profiling and raster scanning for bulk analysis. This versatile instrument is equipped to handle a wide variety of applications including forensics, geochemistry and bioscience analysis.

A compact and completely self-contained system, the UP193-BT measures only 48" (122 cm) x 25.5" (65 cm), not including the small power supply that can be remotely located underneath-a perfect fit for most benchtops and mobile carts.