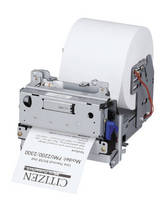 Model PMU2200/2300 Version II kiosk printers allow 28 different ways to install 2 or 3 in. paper by accommodating paper horizontally or vertically, with diameter of 60, 80, or 102 mm, and dropped in from left, right, or top. Thermal head allows printing of graphics at 150 mm/sec. Operating in temperatures from -20 to +60Â°C, they also support 2D barcodes, such as PDF 417 and QR code. Units feature USB interface and 10 memory switches to provide various customization choices.


Citizen Systems Europe, a leading manufacturer of high quality label, barcode and industrial printers, has released Version II of its successful PMU2200/2300 kiosk printers. The new versions combine all the advantages of Version I with improved print speed and quality, offering an even more versatile solution for a wider range of Point of Sale applications.

The new PMU2200/2300 kiosk printers offer 28 different ways to install 2 or 3 inch paper. For example, they can accommodate paper horizontally or vertically, with diameter of 60, 80 or 102 mm, and dropped in from the left, right or top. It doesn't even matter whether you select 58 or 60 mm paper width for the PMU2200 version; a paper guide helps ensure both widths can be used with the same printer. The user simply selects the thickness of paper to be used, which can be anything between 0.060 and 0.15 mm. The PMU printers are ideal in virtually all types of environments, and are designed to operate effectively in temperatures of between -20° and +60°.

Thanks to the new thermal head, the speed at which graphics can be printed has increased to 150 mm per second. This has also resulted in increased reliability of up to 100 million pulses or 100 KM. Furthermore, 2D barcodes, such as PDF 417 and QR code, are now fully supported, so that the printers can be used in even more POS applications.

Systems integrators can switch over to the new generation of PMU2200/2300 kiosk printers easily, as the units' dimensions remain exactly the same. Integration is easier than ever before, due to the addition of a USB interface. As Citizen have upgraded the number of memory switches on the printers, from 5 to 10, the machines offer even more possibilities for customisation.

Citizen Systems Europe operates from locations throughout Europe covering the EMEA region. It offers a wide range of printers for industrial, retail, healthcare and mobile applications specialising in label, barcode, portable and point-of-sale printers. In each case, the company's products are sold and supported by a network of specialised partners.

Citizen Systems Europe is a wholly owned subsidiary of Citizen Systems Japan and part of the Citizen group of companies, a global organisation that manufactures products ranging from its world-famous Eco-Drive watches, calculators, mini-printers and industrial printing systems to machine tools, quartz oscillators, LEDs and other electronic components.