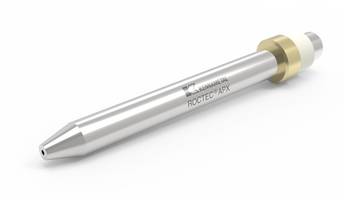 Kennametal is introducing their ROCTEC APX waterjet nizzles and the FABTECH Expo trade show in Atlanta, GA from November 6 to 8. The APX series provides a 20 percent greater life than the ROCTEC 500 series and significantly outperforms conventional tungsten carbide nozzles. The nozzles are ideal for use in precision cutting applications and allow waterjet shops to perform more complex jobs with faster production speeds. It enables customers to better integrate technology advancements. The nozzles have a predictable and consistent operating life.

FABTECH 2018, Atlanta, Georgia, November 6: Kennametal is showcasing its next-generation ROCTEC® APX waterjet nozzles at the FABTECH Expo trade show in Atlanta, GA. The company’s ROCTEC® technology will be on display at Building A, Booth #2724 from November 6 to 8.

The Kennametal APX series of ROCTEC® nozzles provide 20 percent greater life than the industry-leading ROCTEC® 500 waterjet series, which already significantly outperforms other conventional tungsten carbide nozzles. The APX nozzles are ideal for use in precision cutting applications where long, uninterrupted cuts or close tolerances must be maintained for long periods to maintain part integrity or minimize expensive scrap due to premature nozzle failure.

Using APX series nozzles, waterjet shops can take on even more challenging, complex jobs, or run at faster production speeds or longer production periods. It also enables customers to better integrate technology advancements, including advances in waterjet pumps and cutting head technology. In addition, since APX nozzles are based on the original ROCTEC® technology that has been the industry standard for over 20 years, they exhibit the predictable and consistent operating life for which Kennametal ROCTEC® nozzles are known.

Building on a proud legacy, the ROCTEC® APX nozzle provides up to 20-percent longer life compared to its nearest competitor, the ROCTEC® 500. For aerospace, medical, electronics, or any industry aiming for top-notch performance on its abrasive waterjet operation, the Kennametal ROCTEC APX is the clear choice.