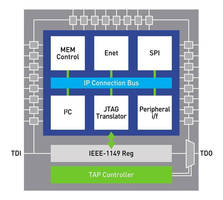 JTAG Technologies is proud to showcase the latest in its highly regarded range of boundary-scan controller hardware for PCB assembly and system testing– the versatile JT 5705 series. This completely new design concept incorporates both JTAG/boundary-scan controller functions and mixed-signal I/O channels. Extensive input protection is provided to ensure high levels of in-service reliability and low maintenance. Connection to the tester is via a USB interface.

The first in the series - JT 5705/USB - is supplied as desk-top instrument, primarily aimed at hardware validation applications in design, small-scale production test and in some cases field service and repair. The JT 5705/USB features two 15 MHz TAPs and 64 I/O’s available through 0.1” IDC connectors. 56 of the I/O channels are always digital, 16 of which also feature a frequency function. The remaining 8 channels can be used as either digital I/O or analog I/O. The unit also contains a user programmable FPGA facilitating application specific digital I/O options. Via the built-in ‘Multi-Sync’ feature several JT 5705/USBs can be combined into a single JTAG controller providing multiple TAPs and hundreds of  I/Os.

The second model in this new range is the larger JT 5705/RMI, a 1U high 19” rack-mountable instrument for use in systems or as a bench-top tester. This unit features four 15 MHz TAPs and 4 groups of 64 mixed-signal I/O  channels providing a total of 256 I/O’s available through 0.1” IDC connectors. As before, within each 64 channels group, 56 channels are permanently digital with 16 available as frequency inputs. The other 8 channels of each group can be individually programmed as digital I/O or analog I/O channel. Furthermore the JT 5705/RMI features a total of 4 user programmable FPGA’s for creating application specific digital I/O options.

The I/O capabilities as provided by the JT 5705/USB are also available in a separate I/O module, the JT 5112 Mixed-signal I/O scan module, or MIOS. The MIOS module can be used in combination with existing JTAG Technologies boundary-scan controllers such as JT 3705, JT 3710 and JT 37x7 adding analog I/O capabilities to those controllers.

MD Peter van den Eijnden is convinced of the new solution: ‘We received quite some market feedback on how the next generation of JTAG/boundary-scan testers should look and increasingly we have been asked to provide analog stimulus and measurements alongside more traditional digital I/O systems. The new JT 5705s provides all this and more in really convenient and low-cost package’.

Direct access to memory and peripheral controllers in FPGAs for testing, debugging and

• Read data from, write data to memory and peripherals without software programming

JTAG Translator is an IP  module from JTAG Technologies that provides a JTAG interface to the internal IP connection bus of an FPGA to which peripherals / peripheral controllers are connected. JTAG Translator is operated through a dedicated  CoreCommander that can be used with JTAGLive and ProVision as well as with all our production packages. CoreCommander provides high-level functions to write data to and read data from memory and I/O addresses without software programming. CoreCommander functions are applied via the JTAG interface. The JTAG Translator IP module can be loaded in the FPGA for test configurations only, or it can be included as standard in functional designs

With JTAG Translator the IP blocks which are already used in a design can be re-used for test or in-system programming purposes. Examples of existing IP blocks are interface controllers for SDR, DDR, Ethernet Mac, USB, UART, I2C, CAN, etc… These are readily available from different IP suppliers like Altera, Xilinx, OpenCores, etc.

The JTAG ProVision software suite is used to generate boundary-scan tests and in-system programming applications for assembled PCBs and systems. This professional development tool is fully automated and supports the import of design data from over 30 different EDA and CAM systems.

JTAGs’ ProVision greatly simplifies the test engineer’s main task - to develop reliable tests with the best possible fault coverage for failures that may occur during PCB (printed circuit board) assembly. ProVision’s advanced technology allows many tests to be generated automatically, for all others ProVision includes tools to assist engineers to develop alternatives easily.

Here some of the main Product Highlights:

• Graphical view and control of nets and devices

JTAG Technologies is a market leader and technology innovator of boundary-scan software and hardware products and services. The company was the first to bring to the market such important advances as automated test generation, automated fault coverage analysis, automated flash and PLD programming via boundary-scan, and visualized boundary-scan analysis. Its customers include world leaders in electronics design and manufacturing such as Ericsson, Flextronics, Honeywell, Medtronic, Motorola, Nokia, Philips, Raytheon, Rockwell-Collins, Samsung, and Sony. Its innovative boundary-scan products provide test preparation, test execution, test result analysis and in-system programming applications. With an installed base of over 6500 systems worldwide, JTAG Technologies serves the communications, medical electronics, avionics, defence, automotive, and consumer industries with offices throughout North America, Europe and Asia. JTAG Technologies headquarters are located in Eindhoven, The Netherlands.