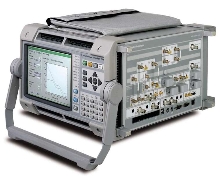 The accuracy maps provide the basis for a receiver-only performance calibration and specification, enhancing absolute accuracy and box-to-box consistency.

Accuracy maps are now standard on the OmniBER jitter products and are supplied with every new OmniBER unit shipped. These maps provide a detailed indication of the individual receiver accuracy performance.

In addition, the Agilent OmniBER has been enhanced with the following capabilities:

o Expanded protocol decode coverage by providing a utility to support free-of-charge Ethereal protocol analysis software. This utility allows the encapsulated protocol to be fed into the Ethereal software for further analysis by removing the GFP-F structure.

o The Ethereal software enables link layer protocols to be captured and analyzed, which means that Ethernet encapsulated higher layer packet transport protocols such as MPLS, IPv6, L2TP, PWE3, etc., can be captured, analyzed and debugged.

o A USB memory stick support, which vastly simplifies the process of saving captured data on OmniBER and transferring the stored data to Ethereal software for the higher layer protocol analysis.

The Agilent OmniBER is a second-generation OTN, NGSONET and jitter analyzer, scalable to 40 Gb/s, and is designed to have extremely low intrinsic jitter, a key enabler of greater measurement accuracy. The Agilent OmniBER provides both functional and jitter conformance testing in a single product.

More information about the Agilent OmniBER is available at www.agilent.com/comms/omniber.

Agilent Technologies Inc. (NYSE: A) is the world's premier measurement company and a technology leader in communications, electronics, life sciences and chemical analysis. The company's 28,000 employees serve customers in more than 110 countries. Agilent had net revenue of $7.2 billion in fiscal year 2004. Information about Agilent is available on the Web at www.agilent.com.
Share